Kangana in a recent tweet passed an anti-Pakistan statement in order to make her point against Bhatts. 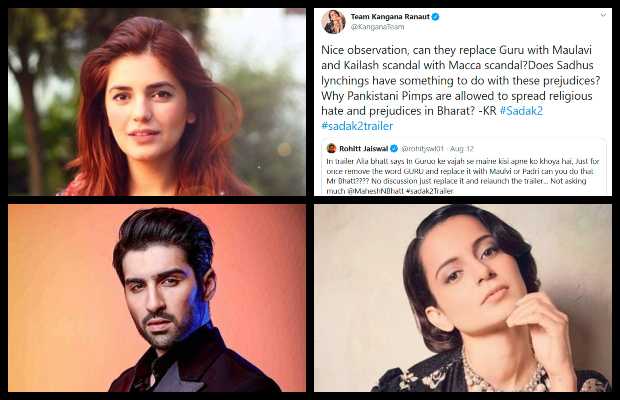 Bollywood actress Ranaut has been pretty active on social media lately in campaigning against the Alia Bhatt and Mahesh Bhatt and accuses them of the reasons in Sushant Singh Rajput’s suicide and making a frequent hit on upcoming film Sadak 2.

However, in the lastest hate-mongering tweet, she dragged Pakistan out of nowhere and that was totally unacceptable for Pakistani celebrities.

Replying over Kangana’s tweet, Pakistani singer Momina Mustehsan wrote, Why does Pakistan get dragged into all ur arguments? It serves no purpose but takes away from ur mission to rightly get justice for SSR, fight nepotism, ur own internal state politics & curb religious hatred & prejudice. Justice can’t be achieved by propagating regional hatred”.

“Why are they so obsessed with Pakistan their stupid media reflects the true image of their mentality, Zyada masla h Pakistan se tu bheju koi pilot Tea is ready”, wrote Muneeb.

tweet
Share on FacebookShare on TwitterShare on PinterestShare on Reddit
Saman SiddiquiAugust 14, 2020
the authorSaman Siddiqui
Saman Siddiqui, A freelance journalist with a Master’s Degree in Mass Communication and MS in Peace and Conflict Studies. Associated with the media industry since 2006. Experience in various capacities including Program Host, Researcher, News Producer, Documentary Making, Voice Over, Content Writing Copy Editing, and Blogging, and currently associated with OyeYeah since 2018, working as an Editor.
All posts bySaman Siddiqui