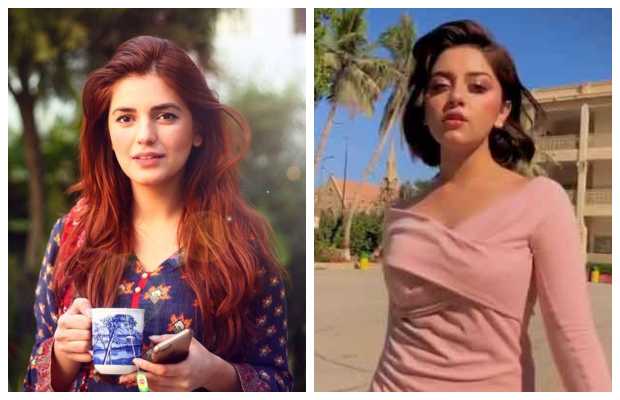 Ehd-e-Wafa star had  captioned the video, saying: “Not seeking approval.”

Momina Mustehsan came forward hitting at the trolls who were moral policing actress, Alizeh Shah over her choice of dressing.

“I would respectfully disagree. She’s still the same person, just expressing herself differently,” said Momina while replying to one of the trolls.

“You and I wouldn’t be here on her page if she hadn’t already gained the ‘fame’ you’re implying she changed herself to chase. If anything, I’m sure you guys have made her more than aware of your sentiments towards her choices – yet she’s choosing to be herself,” Baari singer Mustehsan further added.

“Let’s allow people to express themselves, however, they want to. Just like you and I (and everybody else), people evolve. The way we think, feel, look keeps changing and that’s the beauty of life. Extend freedom to receive freedom,” said Momina, adding, “Just some food for thought. have a lovely day.” 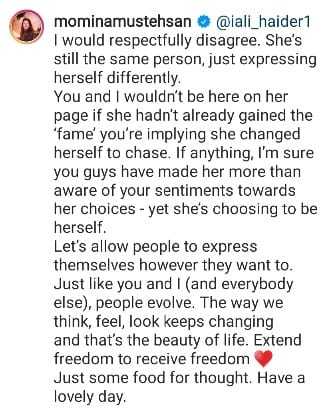 While replying to another comment, Momina wrote: “But Islam doesn’t allow us to hurt people either, right? Whatever someone chooses to do with themselves (with no impact on you) is between them and Allah. It’s not on you. But hurting someone – that’s on you.”

“And Allah for sure doesn’t like that, neither can He forgive you for it, unless the person you’ve hurt. Think about it. Let’s focus on our own Aakhirat,” Mustehsan added. 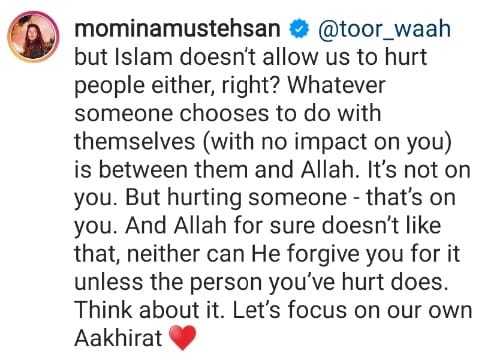