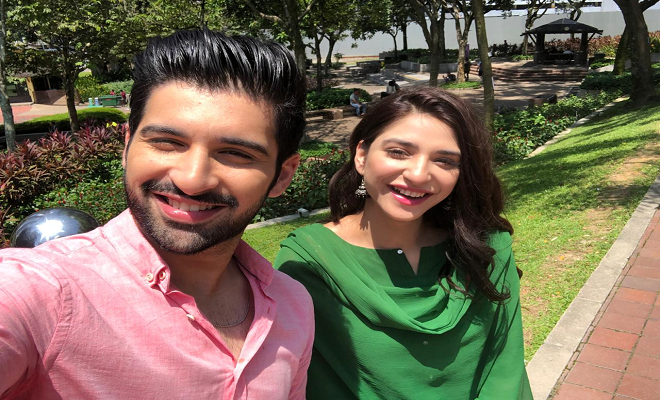 Muneeb Butt is one of the most good looking stars on Pakistan television today. However, its not only good looks that describe this young lad, who has become a heartthrob of hundreds in such a short amount of time. Muneeb is in fact a very talented actor, someone who knows how to get into the skin of his character and deliver some fine performances.

We’re currently loving his intense, lover boy, avatar in ARY Digital’s Koi Chand Rakh and the dedicated Wali in Baandi on Hum TV. But it seems, the actor is once again gearing up to deliver a very strong performance with his upcoming serial.

Starring alongside Ramsha Khan of Tumhari Maryam and Khudparast fame, Muneeb Butt is busy shooting for his new drama Mangharat. Recently, the cast also flew to Malaysia, to complete a spell of the drama as well.

And so, Oye Yeah, reached out to Muneeb to find out what Mangharat is all about. And here’s what he told us.

“There’s an illusion in our society that proposals that come from foreign countries for girls are always better than those in our own country. Our society has this mindset that the lifestyle in foreign countries is blessed with luxury but that is usually not the case and this is the myth that Mangharat will be busting with its story,” said Muneeb.

Adding a bit more about the story line of the drama, Muneeb said, “Mangharat also tackles the issue of physical abuse in a relationship, marital abuse to be more precise. My character, Ahmed, is very violent. He’s rigid, he’s rude and he’s an ayaash in the truest sense.”

“Ramsha and I are cousins in the play who get married. The girl has a fantasy about life in a foreign country. She gets married and comes to Malaysia, but life here is entirely different from what she perceived. Our’s once a rich family is now totally poor. Ahmed has nothing but a temper of his own, and he doesn’t hesitate to hurt his wife,” added Muneeb further.

How the girl manages her life after marriage, how the myth of a foreign life vs life in one’s own country is busted and what happens next is what you’ll have to see the drama for. “Mangharat is not your everyday story. This drama, will definitely bring something new for the audience with each passing episode. My character, I’ve never done such a violent and loud character before. Ahmed is totally different and therefore I am looking forward to it,” shared the Koi Chand Rakh star.

Directed by Ahmed Bhatti and based on a script by Samina Ejaz, Mangharat is an iDreams Entertainment production for ARY Digital. The drama is slated to go on air by mid December.

Bonus News: For all those looking forward to Muneeb’s wedding, Muneeb told us its definitely this year. The actor is currently rushing from one fitting to another, gearing up to surprise his fans big time, real soon!