Naseeruddin Shah is worried for his children in India, being a Muslim!

His recent statement has sparked a fresh batch of controversy. 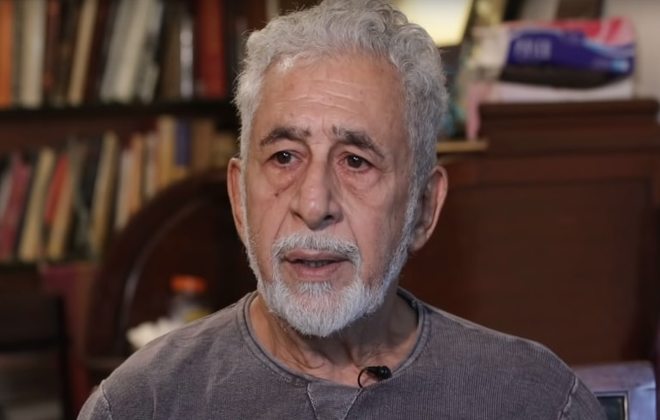 Bollywood’s veteran actor Naseeruddin Shah in a recent statement has shared his concerns for being a Muslim in India. The actor is worried for the safety of his children living in India.

According to the Indian Media reports, the veteran actor showed his concerns for his children because he imagines a situation where they may be surrounded by an angry extremist’s mob and asked: “Are you Hindu or Muslim?”

Naseeruddin Shah said, “My children will have no answer at this moment as we chose not to give a religious education to our children”.

His comments have sparked a controversy. He was referring to the recent violence sparked by the finding of cattle carcasses in Uttar Pradesh’s Bulandshahr.

The violence sparked by the discovery of a cow death, in which a police officer was killed by a mob, he said India has already witnessed that the death of a cow has more significance today than that of a police officer.

The Bollywood actor went on to say there is a “poison” that has spread in the Indian society. “It will be very difficult to capture this genie back into the bottle.”

He added, “There is complete impunity for those who take the law into their own hands.”

And he went on saying, “We have already witnessed that the death of a cow has more significance (in today’s India) than that of a police officer.

It’s being reported that India’s Uttar Pradesh Police have arrested three people in connection with the alleged cow slaughter, but the policeman’s killers are still at large.

Ever since his comments, #NaseeruddinGussaHai has been trending on social media, mainly on Twitter. People came in sharing their point of view over Shah’s remarks. And some are furious for his statement

What an utter shame, what a tragedy. One of India's finest actors, the generation-defining star who gave voice to meaningful new cinema, cries out that his children may no longer be safe in his country. #NaseeruddinShah Cry, the beloved country https://t.co/nNVj2bV4d6

Why belittle your own nation in the name of freedom of speech and expression?

RSS BJP is the purveyor of hate in india

Where is Islamic extremism in india anyways? #NaseeruddinGussaHai

tweet
Share on FacebookShare on TwitterShare on PinterestShare on Reddit
Saman SiddiquiDecember 20, 2018
the authorSaman Siddiqui
Saman Siddiqui, A freelance journalist with a Master’s Degree in Mass Communication and MS in Peace and Conflict Studies. Associated with the media industry since 2006. Experience in various capacities including Program Host, Researcher, News Producer, Documentary Making, Voice Over, Content Writing Copy Editing, and Blogging, and currently associated with OyeYeah since 2018, working as an Editor.
All posts bySaman Siddiqui