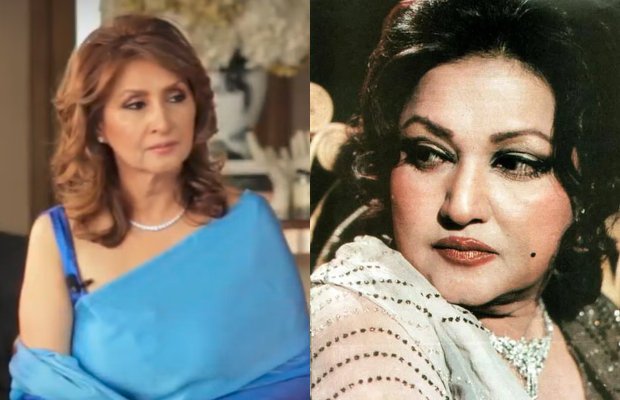 “Madam Noor Jehan is a name synonymous with greatness. A woman that did more for her country & her art than most can dream of doing in a lifetime. She received every accolade known to mankind & while leaving us was also rewarded in death to depart for Heavenly abode on the most blessed of days, Mina Hasan wrote.

Hasan maintained that she has been moved to share her thoughts on Ali Azmat’s comments upon her followers’ requests, saying”I got thousands of you today sending messages of how much you love her & that you want me to say something about what someone had to say about her.”

She went on to say: ‘To that, I share one of my favourite quotes “ What you say about me, says more about you.” When someone expresses an opinion breaking boundaries of respect & decorum they show you that they lack common decency , grace & humility.  Respecting someone indicates the quality of your personality. Freedom of expression is qualified for a good reason. It should not be permitted to be used as means of indignation for another / others.’

“As a society, we have observed our social fabric wither to the whims of egotistical expressions of nothingness, founded in a misplaced sense of self-importance/privilege. For reasons which are incomprehensible to decency & courtesy, humiliating another vociferously is now seemingly justified because “I am allowed to express what I feel”. You most certainly are. But with every privilege exercised, there is a much greater need to observe propriety. Every privilege claimed is accompanied by an overwhelming need to observe caution.

“Let us a take a moment to disagree with disgraceful utterances from an interview conducted with a now-faded representative of Pakistan’s music industry. Let us take a moment to recognize this person’s unregulated & greatly unjustified tenor & evident lack of intellectual coherence.

“When explaining popular culture relevant to his generation, he effortlessly stooped to an abhorrent low. Evidently unable to express himself whilst visually pleased with this demeaning ‘quality’, he did not shudder for a month when discussing a legend, an icon, a muse of all things valued & endeared, a mother.
Introspection is at an all-time low with such primitive minds,” she concluded.