Sara Ali Khan had said that she would want to date Kartik Aaryan! 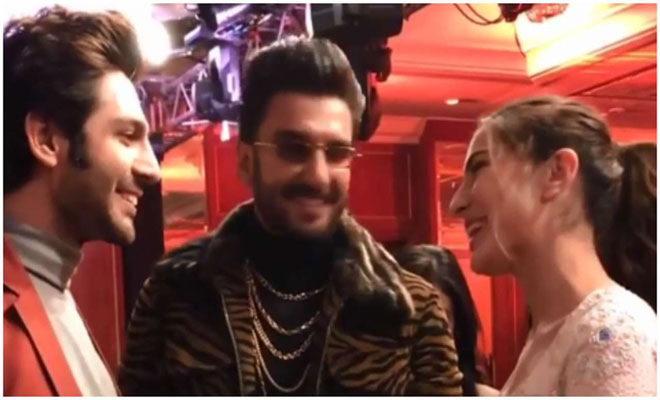 Ever since Bollywood newbie Sara Ali Khan confessed about having her crush on actor Kartik Aaryan at Karan Johar’s chat show, fans of the two reportedly want to see them together. At a recent event, Ranveer Singh played cupid and introduced Sara to the Pyaar Ka Punchnama star, the video of which has gone viral.

In the event, Ranveer Singh was seen greeting Kartik and teasing his Simmba’ co-star Sara with the actor, stating how he was glad that the duo had finally met. Further, he also makes a heart with his hands.

During the rapid fire round on Koffee with Karan, Sara Ali Khan had said that she would want to date Kartik Aaryan. Her statement made headlines and soon after Aaryan was quizzed by many about his response to the same. Kartik Aaryan had then said, according to India TV, that he would like to work with Sara in a future project.

On the work front, Sara Ali Khan is gearing up for her cop-drama Simmba in the direction of Rohit Shetty. On the other hand,  Kartik will be next seen in Lukh Chuppi, alongside Kriti Sanon.