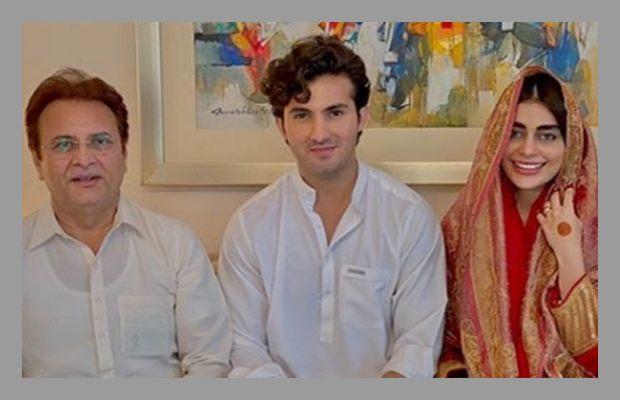 The confirmation comes from Behroze Sabzwari while making an appearance on the Express TV Ramzan show.

The Father-in-law of Sadaf said that the couple is expecting their first child and that he is going to be a grandfather again.

During a conversation on Rabia Anum’s Piyara Ramazan, Behroze shared, “Our daughter-in-law, Sadaf, she is such a lovely child. I request prayers for her because mashaAllah she is…,” at this point, the host Rabia intercepted asking, “She’s expecting?”

To which Behroz Sabzwari responded in the affirmative, the conversation was followed by many congratulations from the host.

The couple recently sparked rumours of pregnancy following an appearance on a game show in which Shahroz asked his wife to walk carefully as she made her entry on the stage.

Sadaf and Shahroz tied the knot in March 2021 in a simple nikkah ceremony.

Sadaf Kanwal and Sahroz Sabzwari’s nikkah news has taken the country by storm and become the most trending topic.

The couple had been under the radar of the rumors of the affair and people had blamed Sadaf for Syra’s divorce from Shahroz.