Salman Khan yet again in trouble?

The undisputed king of Bollywood, Salman Khan, has triggered another controversy for himself, but this time Sallu Mian seems to be entangled because of a scene requirement in Bharat movie to hoist a Pakistan flag. 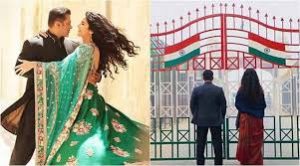 As per details emerging on Indian Media, the Bharat team wanted to shoot a sequence at the Wagah border, which, however, could not be possible due to security concerns and the team chose a village in Punjab where they recreated the set for movie.

Everything was well and good until they put up a Pakistan flag on the land, which actually sparked the controversy. Although it is just for the shooting purpose, the villagers there got extremely upset and filed a police complaint against the Bajrangi Bhaijaan’s actor.

“A lot of local bodies were upset about how someone could hoist Pakistan’s flag on Indian soil. We have had such issues earlier in Kashmir and in places like Mumbai as well, when Pakistan flags have been put up during India-Pak cricket matches.” Sources of Indian media said. “Even though this is for a film shoot, local organizations are upset and have not just filed a police complaint against Salman, but also surrounded the sets of the film and the hotel where Salman was staying to express their indignation over the hoisting of the flag. After all it is a film shoot, but the locals refused to understand.”

The filmmakers of Bharat quickly wrapped up the film shoot and Salman has returned to Mumbai, but with one more court case to his name.