The actor tries to troll his trolls but it backfired badly! 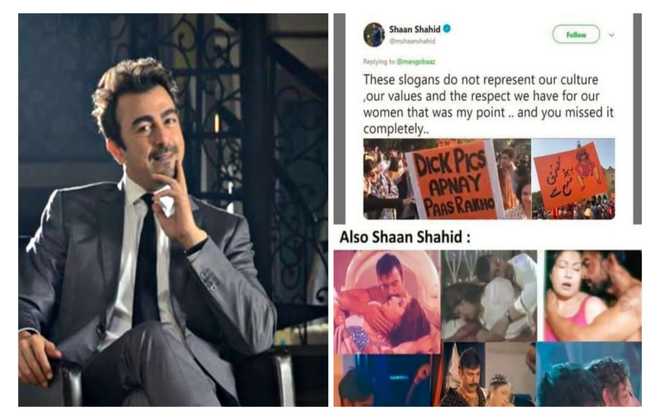 Film star Shaan Shahid has been pretty active on the social media lately, sharing his views apart from films, on various social and political happenings.

Veteran actor Shaan Shahid is being slammed on social media for criticising some of the posters raised during the Aurat March 2019 held across major cities in Pakistan on International Women’s Day.

As Pakistani star shared his views regarding the recently held Aurat March, on women’s day. His message was not received in good numbers by many of the twitter users. And while trying to troll others over their replies, the actor himself gets brutally trolled.

These slogans do not represent our culture ,our values and the respect we have for our women that was my point .. and you missed it completely.. pic.twitter.com/9jaCSHnRUG

You forgot to show this pic.twitter.com/pesIg5Q6IW

As soon as he shared his shared this post, things started to get nasty on social media. People came up sharing collages made up of scenes from Shaan’s films. Which was not appreciated by the actor himself.
https://twitter.com/FaisalZamanKha5/status/1105382308473987072

People were not pleased with his remarks at all!

Legend says that if you say the words ‘dick, period, vagina’ three times, a flag waving shaan shahid jumps out of a helicopter and saves you. https://t.co/59uwbwM1Ti

Shaan Shahid is so stupid. Its almost laughable. #AuratMarch

What do you call a movie starring Shaan Shahid: