Shoaib Akhtar under criticism for a meme tweet during Hajj

ormer Fast Bowler Shoaib Akhtar in a now-deleted video, made sure to hit ‘Shaitan’ with maximum speed. 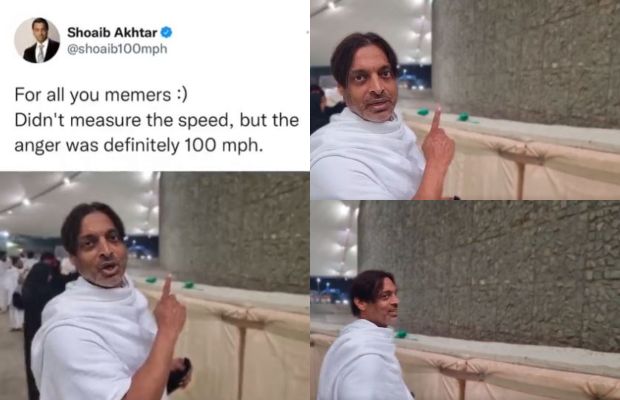 Shoaib Akhtar who is performing Hajj this year “as a state guest of Saudi Arabia” came under criticism for a meme tweet.

The former cricketer has been constantly sharing videos on his social media platforms as he embarked on the Hajj journey.

However, Shoaib Akhtar’s latest tweet has left the fans and followers disappointed.

Former Fast Bowler Shoaib Akhtar in a now-deleted video, made sure to hit ‘Shaitan’ with maximum speed.

But the internet never forgets!

Sunnah is to throw the stones gently.
Sometimes hatred leads towards the wrong path & derogatory to the real essence. @shoaib100mph pic.twitter.com/GEq7K56esL

Former Fast Bowler Shoaib Akhtar made sure to hit ‘Shaitan’ with maximum speed! 🤣

Around one million pilgrims from across the world performed four main rituals of Hajj on Saturday, Dhul Hijjah 10, which is also known as Yaum Al-Nahr or the Day of Sacrifice.

After reaching Mina from Muzdalifah this morning, Pilgrims performed stoning at Jamarat Al-Aqaba.

Pilgrims then proceeded to Makkah to perform Tawaf Al-Ifadah and Sai’ at a time when most Muslims other than pilgrims all over the world started celebrating Eid ul Azha.

It was rather unfortunate that at such a blessed occasion when people pray to God and seek forgiveness the former fast bowler thought of posting a video making fun of one of the rituals of Hajj.

May Allah forgive us all!