The veteran actress wrote, " this is how artists are honored by the state". 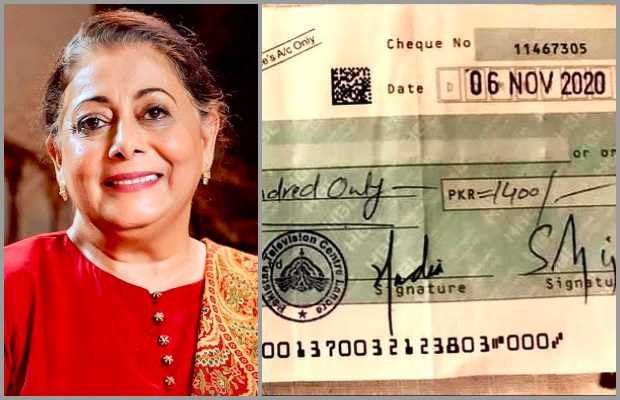 Veteran actress Simi Raheal is disappointed after receiving a Rs 1400 cheque from PTV.

Taking to social media, Simi Raheal shared that she has received a cheque worth one thousand and four hundred rupees only,  for the month of November 2020, against her services.

Showing her disappointment, the veteran actress wrote, “ this is how artists are honored by the state!!! This is the acknowledgment of Pakistan Television after 4 decades this was truly appalling!!.”

This is not the first time that state television is acting disrespectfully towards veteran artists. Earlier in September, Veteran actor Rashid Mehmood revealed that he has received six hundred and twenty rupees only as a work fee from Pakistan Television.

However, later the management of PTV sent apologies to him with a new cheque of Rs 9600 for the services he had rendered two years ago. But Rashid Mehmood has vowed to never work with PTV again.

tweet
Share on FacebookShare on TwitterShare on PinterestShare on Reddit
Saman SiddiquiNovember 29, 2020
the authorSaman Siddiqui
Saman Siddiqui, A freelance journalist with a Master’s Degree in Mass Communication and MS in Peace and Conflict Studies. Associated with the media industry since 2006. Experience in various capacities including Program Host, Researcher, News Producer, Documentary Making, Voice Over, Content Writing Copy Editing, and Blogging, and currently associated with OyeYeah since 2018, working as an Editor.
All posts bySaman Siddiqui