From just friends to just married, Singer Haroon Rashid’s wife opens up about couples’ journey in a heartfelt note on social media.

Famous singer of Pakistan music industry, Haroon, 47, and Farwa got married a few months ago during the lockdown in June, and their wedding announcement struck Haroon’s fans as the most pleasant surprise.

Taking it to social media, Farwa Hussain shares how their bonding resulted in their decission to get married.

While sharing photos from her wedding day, Farwa Hussain wrote: “In 2014, Haroon and I met for the first time. We were introduced to each other through a cousin of mine. After that, we stayed in touch on social media and the phone. We bumped into each other at different events a few times. We made many plans but never got a chance to connect properly and got busy with our lives here and there”.

“We finally got to hang out earlier this year. We met a couple of times and there was an immediate connection. We started to get to know each other better. Just a couple of weeks later, he surprised me with a proposal and confessed that he had liked me all along. I was pretty shocked and surprised in a happy way and said YES!”, she added. 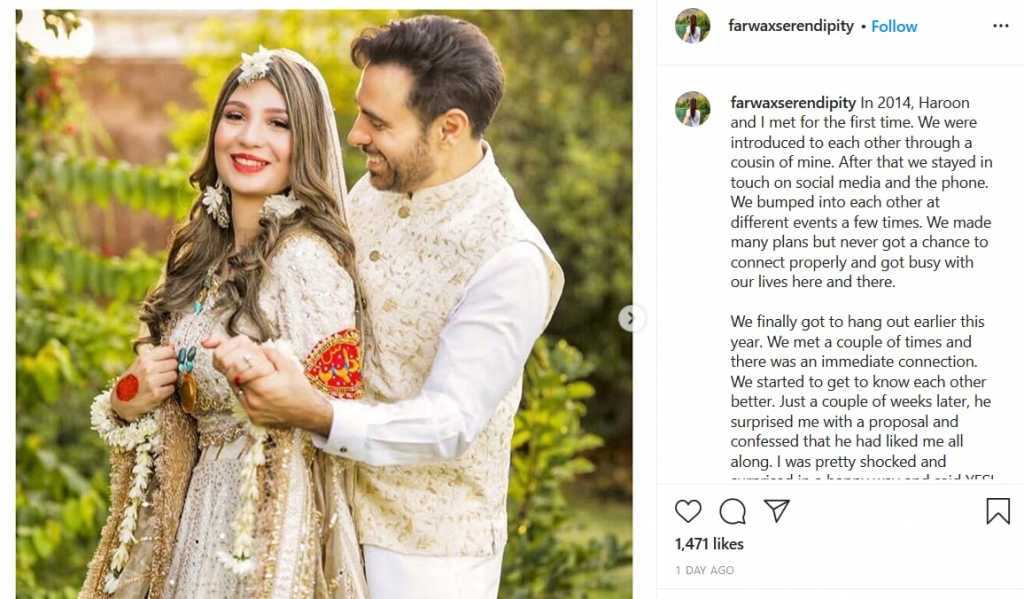 “The connection and understanding that I felt with him, I had never felt anything like that before in my life. I knew this was it for me. I knew he was the one. I liked that instead of asking me to be in a relationship with him, he asked for my hand in marriage. So we decided not to waste time and got married within a few weeks”, Farwa continued.

“We found our happily ever after, MashaAllah MashaAllah!“, Mrs. Haroon concluded.