A jury on Wednesday convicted American actress Amber Heard of defamation in a case brought against her by her ex-husband, actor Johnny Depp. 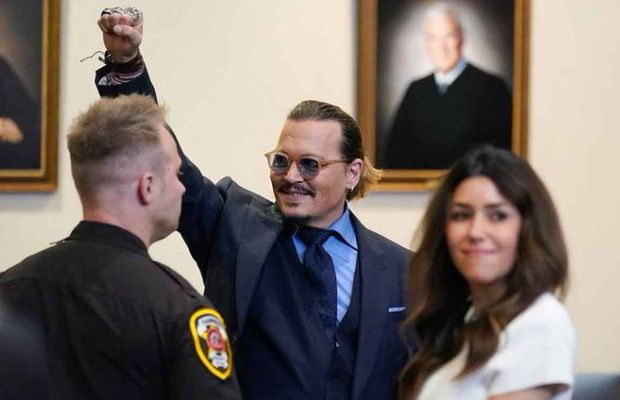 Johnny Depp won his defamation case against his ex-wife, Amber Heard, on Wednesday.

The jury of seven people reached a decision after in the defamation case brought by Johnny Depp against his ex-wife Amber Heard.

A seven-member jury found Amber Heard liable for defamation against Johnny Depp and ordered Heard to pay Depp $15M in compensatory and punitive damages; While Depp has been ordered to pay Heard $2M in compensatory damages.

Netizens including Johnny Depp fans were jubilant over the outcome of the trial.

Many on social media platforms are calling the decision the “best possible outcome”, while millions celebrated  Depp’s victory saying justice is “alive and well.”

Overcome with emotions at the moment! He did it! So proud of him! It has been an honor to fight for truth & justice the past 6 years. Finally, he has received justice!! #JusticeForJohnnyDepp pic.twitter.com/TL8oECyJmF

Amber heard asked Johnny Depp to tell the world that he, a man, was a victim of domestic violence and see who believes him.
He had already won the court of public opinion.
Today he won in the court of law! 🫶 #TruthWins #JohnnyDeppVsAmberHeardTrial #JohnnyDepp

JOHNNY DEPP WAITED SIX FUCKING YEARS, SIX YEARS FOR THE PUBLIC TO HEAR HIM AND THEY DID. THE JURY BELIEVED HIM

Camille is so happy. She looks like 1000 stones fell off her heart. Thanks to the jury, judge and his legal team. Glad this man got justice ⚖ #AmberTurd #JohnnyDepp #CamilleVasquez #BenChew pic.twitter.com/deLOyFKwle

While many also responded to the statement shared by Amber Heard shortly after the verdict was announced.

This is NOT a setback for women. We still believe the victims, we just didn't believe YOU. #JusticeForJohhnyDepp #JohnnyDepp #TruthWins https://t.co/nvg3W4DCOO

This woman just can’t quit her manipulative ways. She continues to abuse the abused, thriving on their real pain and struggle.
Liars get what they deserve, Amber, just apoligise and blame it on your mental health or whatever.#JusticeForJohnnyDepp #TruthWins #JohnnyDepp #verdict https://t.co/wqxBJszT8j