The Young Royals Have Some Adorable Questions for Sir David Attenborough

Within an hour of posting, the video has received more than 350,000 views on Twitter and 1.3 million on Instagram 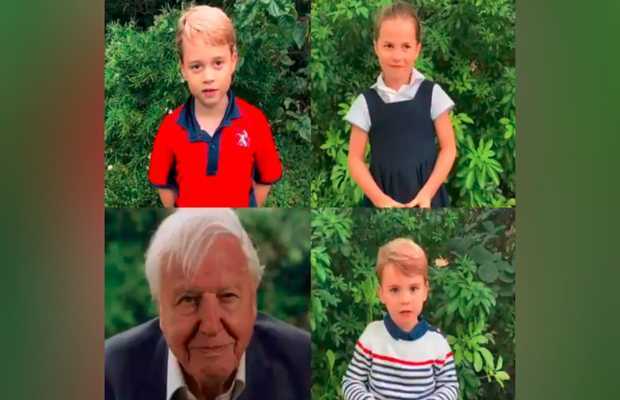 Sir David Attenborough, who made a cracking Instagram debut a week ago has received some adorable questions from the young British Royals, Prince George, Princess Charlotte, and Prince Loui.

Taking it to social media, the Kensington Palace shared a cute video featuring the Cambridge Kids. with a caption, “Sir David Attenborough, we’ve got some questions for you…”, with three emojis: a globe, a spider, and a monkey.

Those three emojis turn out to resemble the kids’ queries.

“Hello, David Attenborough,” says 7-year-old Prince George. “What animal do you think will become extinct next?”

“Well, let’s hope there won’t be any!” Attenborough responds, using the example of the mountain gorilla. (In the 1980s, the species was close to dying out, but thanks to conservation efforts and media coverage, it rebounded.)

The second is Princess Charlotte, in a navy blue dress, who tells Sir David Attenborough that“I like spiders”. and the 5-year-old asks, “Do you like spiders too?”

“I love spiders,” he replies. “I think they are wonderful things! Why is it that people are so frightened of them?”.

And we think that particular inquiry sparks a genuine reaction from Attenborough.

And last is the 2-year-old, youngest Cambridge, Prince Louis’s turn.

Who wants to know, “What animal do you like?”.

Without so much as a second thought, Attenborough responds to the cutest query, saying, “I like monkeys the best”.

“Because they’re such fun. They can jump all over the place”, he further elaborates.

Within an hour of posting, the video has received more than 350,000 views on Twitter and 1.3 million on Instagram, with the comments section getting filled up with replies about the sweetness of the post.

tweet
Share on FacebookShare on TwitterShare on PinterestShare on Reddit
Saman SiddiquiOctober 3, 2020
the authorSaman Siddiqui
Saman Siddiqui, A freelance journalist with a Master’s Degree in Mass Communication and MS in Peace and Conflict Studies. Associated with the media industry since 2006. Experience in various capacities including Program Host, Researcher, News Producer, Documentary Making, Voice Over, Content Writing Copy Editing, and Blogging, and currently associated with OyeYeah since 2018, working as an Editor.
All posts bySaman Siddiqui