Esra Bilgic is calling out the United Nations Goodwill Ambassador for warmongering. 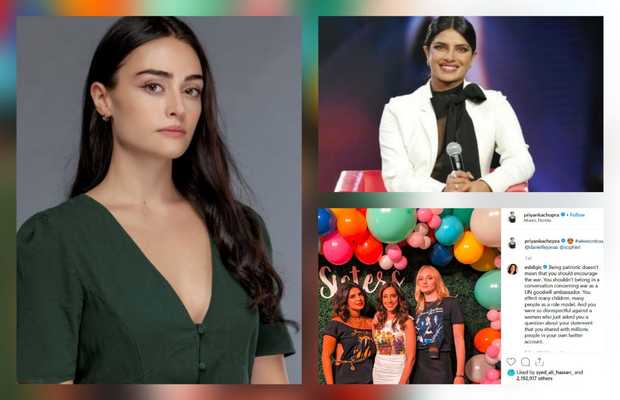 Indian actress Priyanka Chopra, who confronted by a young Pakistani woman, is being internationally condemned for supporting the war between the neighbouring countries.

The lasted to condemn Indian film actress was Esra Bilgic, Turkish actress and model who is internationally known as Halime Sultan, the character she played in the world-famous Turkish series Diriliš Ertugrul.

Esra commented on Priyanka Chopra’s Instagram post and expressed her disappointment over Priyanka’s rude behaviour towards Pakistani girl who asked a question about her tweet supporting the war.

“Being patriotic doesn’t mean that you should encourage the war. You shouldn’t belong in a conversation concerning war as a UN goodwill ambassador”, wrote Esra Bilgic

Halime Sultan further continued saying, “You affect many children, many people as a role model. And you were so disrespectful against a woman who just asked you a question about your statement that you shared with millions of people in your own twitter account”. 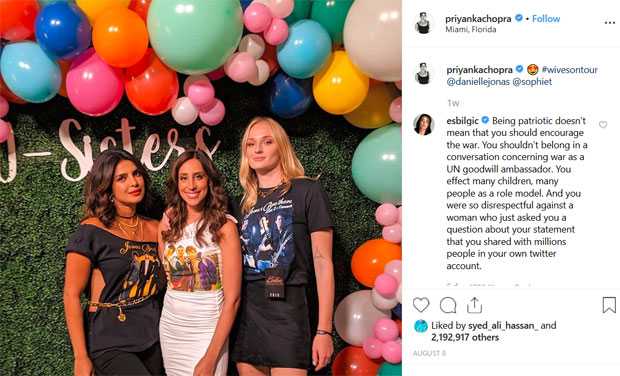 This all started at the BeatyCon, where Pakistani-American Ayesha Malik called out UNGWA Priyanka Chopra for warmongering following the Balakot airstrikes.

Priyanka Chopra tweeted during a time when we were this 👌🏽 close to sending nukes to one another. Instead of advocating for peace she tweeted in support of the Indian army pic.twitter.com/LhbMkOW59v

However, the microphone was snatched from Ayesha’ hand and moreover, Priyanka tried to justify her stance by labeling herself that she is ‘patriotic‘, and quoted ‘we’re all here for love‘.

People are delighted over the response provided by the Turkish model and actress. Her reply came as a surprise for Pakistani people who were definitely not expecting this from their favourite series’ actress.

@esbilgic Thank you 💗 For Standing Out Against Condescending Hypocrite, Your Courage And Strength Against Such beings Is admirable. Long Live turkey 🇹🇷 Long Live Pakistan🇵🇰 long Live Their Friendship🇹🇷🇵🇰
we Love You #HalimeSultan ❤ pic.twitter.com/yducUBLkvj

Ertugrul Star @esbilgic responds to the filth of #PriyankaChopra – @UNICEF Esra is the kind who should be ur Ambassdor. Not warmongering hypocrites. #Kashmir #Ertugrul #Turkish pic.twitter.com/b4pXfKOuwJ

tweet
Share on FacebookShare on TwitterShare on PinterestShare on Reddit
Saman SiddiquiAugust 21, 2019
the authorSaman Siddiqui
Saman Siddiqui, A freelance journalist with a Master’s Degree in Mass Communication and MS in Peace and Conflict Studies. Associated with the media industry since 2006. Experience in various capacities including Program Host, Researcher, News Producer, Documentary Making, Voice Over, Content Writing Copy Editing, and Blogging, and currently associated with OyeYeah since 2018, working as an Editor.
All posts bySaman Siddiqui