Well, it comes to the mind that why are Indians so obsessed with every hot Pakistani man in uniform? 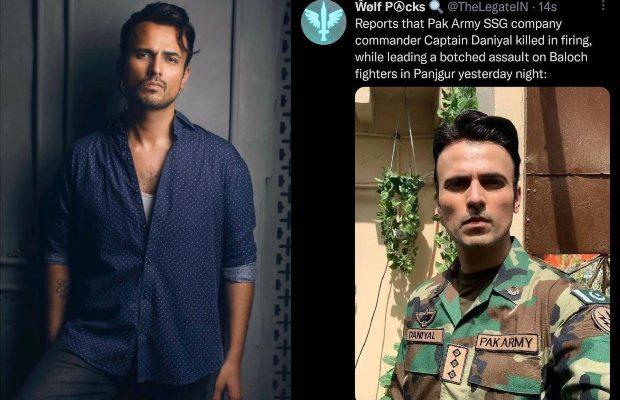 Dear Propagandists, you should behave!

Each day comes with new propaganda that leaves us wondering that is it possible for humans to exist without grey matter.

And every time there are reports of terrorist attacks in Pakistan somehow social media users across the border start to propagate fake news using Pakistani actors’ images.

The latest victim of fake news this time happens to be Usman Muthkar.

Hum Kahan Kay Sachay Thay star himself broke the news of hilarious claim that he is was among the martyred soldiers.

Calling out the propagandists, Usman Mukhtar tweeted on Saturday, “

Usman Mukhtar is a Pakistani actor, director, and cinematographer.

He recently made waves with his role in the Mahira Khan and Kubra Khan-starrer Hum Kahan Ke Sachay Thay.

The image in question is from the ongoing drama Sinf e Aahan, in which his character is about to debut yet.

Well, it comes to the mind that why are Indians so obsessed with every hot Pakistani man in uniform?

tweet
Share on FacebookShare on TwitterShare on PinterestShare on Reddit
Saman SiddiquiFebruary 5, 2022
the authorSaman Siddiqui
Saman Siddiqui, A freelance journalist with a Master’s Degree in Mass Communication and MS in Peace and Conflict Studies. Associated with the media industry since 2006. Experience in various capacities including Program Host, Researcher, News Producer, Documentary Making, Voice Over, Content Writing Copy Editing, and Blogging, and currently associated with OyeYeah since 2018, working as an Editor.
All posts bySaman Siddiqui