Veena Malik is VERY Vocal About Kashmir Issue and Indian Netizens Are Unable to Handle It!

The starlet’s Twitter handle is flooded with pro-Kashmir posts and one particular picture has irked the Indian Twitteratis a lot! 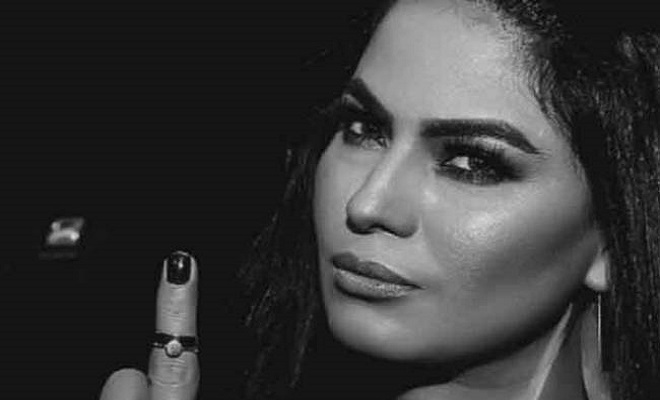 Veena Malik, often known for her loud and bold stance, has once again managed to grab attention and make noise on the much needed Kashmir issue. Amid the protest and concerns of celebrities on social media against the revoke of Article 370 in Kashmir (to sabotage its sovereignty) Veena took a rather bold step and posted a picture humiliating the Indian army.

“To The Indian Brutality In Kashmir,” captioned Veena as he posed with a slang gesture from her hands.

Twitter users from India took quite a great offence of Veena’s tweet and tried hard to troll the actress. From some calling her names to others reminding her of her Bollywood career, netizens from the neighboring country tried hard to bring the actress down. However, Veena did not budge.

Indian forces cannot stop the Kashmiris from their right of self-determination by resorting to such atrocities, Independence is the fundamental right of Kashmiri people and no one can deprive them of their basic right through the use of force. #SaveKashmirSOS #KashmirBleeds

Following the picture, Veena continued to tweet in support of Kashmiris who are struggling against the atrocities of Indian government after the recent lockdown of the state.

Occupying #Kashmir with a force of One Million, putting the entire state under curfew like situation and invoking #Article370 clearly show that Kashmir is being annexed forcefully.
Meanwhile, the @UN 's role is a reminder of that of the League of Nations.#StandwithKashmir

India violated all international laws by using cluster bomb and using military force against the innocent Kashmiris
For 70 years India has failed to suppress Kashmiris,India’s reincarnation of Hitler; Modi be a fool to think he can by force defeat Kashmir cause today#Article370

Alongside, Veena is continuously retweeting posts from journalists, celebrities and politicians that favor Kashmir is making best use of her Twitter handle. While it is not the first time Veena is under fire for her strong statements on social media, the actress has however once again showed her strong nerve among the trolling of haters and opponents.

True stardom comes with responsibilities.. Every voice Matters.. Specially Those with Huge followings!
We all are accountable to Allah and everyone should raise their voice against the tyranny of India because it's the right of our Kashmiri brothers upon us.#KashmirBleeds