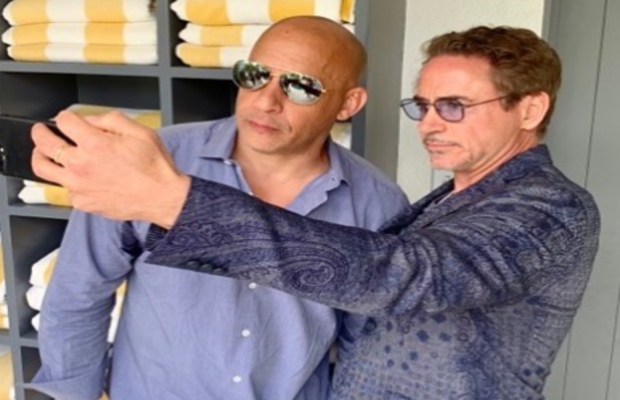 After Avengers: Endgame and before Fast 9, Vin Diesel has shared a heartfelt note for his co-star Robert Downey Jr. Both actors have appeared in two MCU (Marvel Cinematic Universe) films, Avengers: Infinity War and Avengers: Endgame.

In his long posted message The Fast and Furious actor says that Downey Jr. provided him with the inspiration to take Fast 9 to “new heights”.

While sharing a picture of the two on Istagram, where Downey can be seen clicking a selfie, Diesel writes:

My brother Bobby… let me tell you about this amazing individual. He has a way of giving everyone he comes in contact with so much inspiration. You see it in the roles he plays. Like me, he has never won an Oscar, but that means zero when it comes to how he has affected the world.

He further added, “His very existence represents the power of resilience. The love you have for him pales in comparison to the love I have for his spirit. On the weekend of the highest grossing movie of all times he in the most humble way says, your next brother”.

“Fast 9 is going to take the industry to new heights! His belief in me sometimes scares me. I never want to let anyone down. So I will do everything in my power to make sure FAST 9 is everything! I love you RDJ and your brotherhood is truly a gift of which I am eternally grateful for”, concluded Vin Diesel.

Reportedly Fast & Furious 9 is currently in development phase, though shooting hasn’t officially started. Diesl shared an image of himself meeting with Lin as well as the writers of the film; Daniel Casey and Chris Morgan.

Fans will have to wait until 2020 for Fast and Furious 9, However, they will still get a Fast and Furious movie this year, as the franchise expands for its first spinoff called Fast & Furious Presents: Hobbs & Shaw.

tweet
Share on FacebookShare on TwitterShare on PinterestShare on Reddit
Saman SiddiquiMay 12, 2019
the authorSaman Siddiqui
Saman Siddiqui, A freelance journalist with a Master’s Degree in Mass Communication and MS in Peace and Conflict Studies. Associated with the media industry since 2006. Experience in various capacities including Program Host, Researcher, News Producer, Documentary Making, Voice Over, Content Writing Copy Editing, and Blogging, and currently associated with OyeYeah since 2018, working as an Editor.
All posts bySaman Siddiqui