Company famed actor Vivek Oberoi who hasn’t been much in news lately, rose to internet fame just like that with an offensive tweet related to superstar Ashwariya Rai Bachchan. The tweet contained a meme that also featured Ashwariya’s daughter Aaradhya Bachchan – and this was something way below the belt. 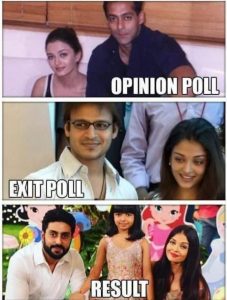 And as legend would have it, fellow celebrities, fans, friends and basically everyone called out Vivek on his inappropriate tweet. Actor turned politician Urmilla Matondkar was one of the firsts to slam the Saathiya actor.

Very disgraceful and in extreme bad taste of #VivekOberoi to put up such a disrespectful post. At least show the decency to pull off the post if not apologise to the lady and her little girl.

“At least show the decency to pull off the post if not apologize to the lady and her little girl,” wrote the Rangeela actress.

Following the suit, actress Sonam Kapoor came out in support of Bachchans and called Vivek’s tweet ‘disgusting and classless’.

This did not go down with Vivek very well and he responded to Sonam by saying ‘don’t overreact in life and don’t overact in films’. Needless to say, this fire hasn’t totally burnt out as of yet.

In addition to the celebrities, Maharashtra Women’s Panel and other women centric organizations also raised their concern over Vivek’s tweet. Categorizing it as ‘sexist’, the support groups demanded apology from the actor and announced to take action against him.

After a whole load of backlash, Vivek Oberoi – who had fought hard to defend his ‘harmless’ tweet – took down the controversial meme and also issued a subtle apology.

Even if one woman is offended by my reply to the meme, it calls for remedial action. Apologies🙏🏻 tweet deleted.

And he did not forget to mention ‘his active role in women empowerment’ too.