And smart men shouldn't be avoiding wife's warning that what wise say. 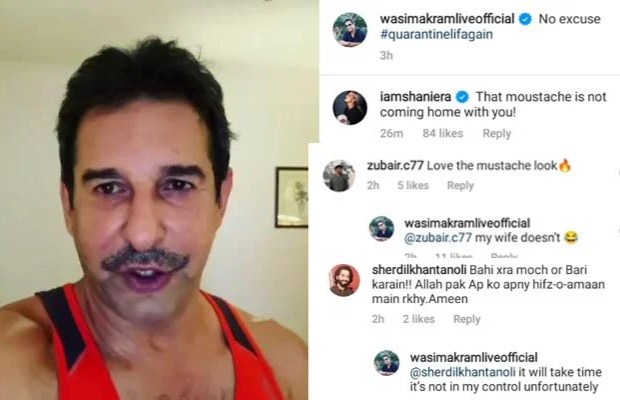 Wasim Akram’s quarantine moustache was disapproved by his wife Shaniera!

Former fast bowler Wasim Akram took to social media flaunting that he has sported a moustache while being in quarantines in Melbourne.

But when wifey came to know about it she was quick to disapprove with a warning!

And smart men shouldn’t be avoiding wife’s warning that what wise say.

Wasim Akram is in Melbourne to meet his wife and daughter after 11 months. But before going home he has to complete the mandatory 14 days quarantine.

Sultan of swing took to social media giving an update on his quarantine activities.

“Good morning and Assalam o Alaikum. This is a quarantine moustache. It has been eight days [in quarantine] and it is quite difficult to exercise but just like I motivate you [fans], you should also motivate me,”  Wasim Akram can be heard saying in the video message.

Shaniera saw the video, and her response was, “That moustache is not coming home with you!”