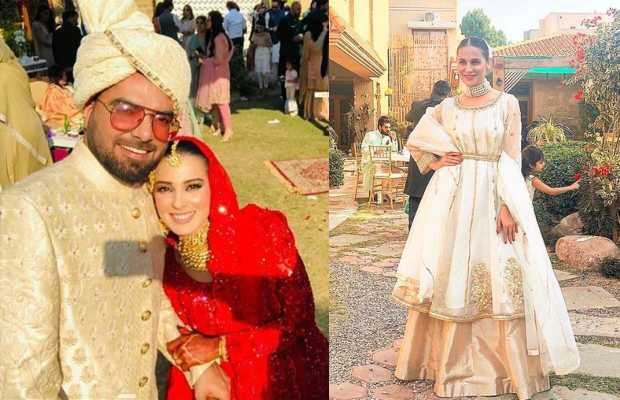 Yasir Hussain has named Nausheen Shan as an uninvited guest at his wedding.

The accusations from the host and actor Yassir Hussain have ignited a virtual fight on social media.

While actress and model Nausheen Shah has labeled Yasir a person with memory issues.

It all started when Yasir Hussain while appearing on the talk show Ghabrana Mana Hai,  hosted by Vasay Chaudhry, revealed the list of uninvited guests at his wedding last year.

He said despite only inviting 170 people, more than 200 guests showed up, including Nausheen Shah, who came to the event “forcefully.”

His remarks were not received well and the two celebrities later got engaged in an exchange of comments through social media.

Nausheen responded to the controversy when approached by Galaxy Lollywood for her comments. She said,” Would anyone go to someone’s house uninvited? I wouldn’t go to anyone’s house if I wasn’t invited, let alone going to someone’s wedding.”

A fool is known by his speech and a wise man by his silence. Yasir called me himself and invited me. I feel so sorry for Yasir because certainly has serious memory issues. I also feel really sorry for Iqra. She is taking one for the team”, she added.

Things not nasty as Yasir Hussian in his recent Instagram post shared more details about the matter.

“If I am in the wrong for speaking the truth, then the host asking me questions is also wrong, the television channels airing it are also wrong, and the bloggers who spice up the news and spread it to the public are also wrong, including every person watching and abusing me — the entire system is wrong, its not just me,” Yasir said in his Insta story. 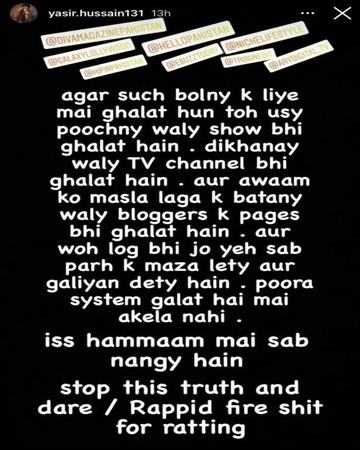 “And where my senior actor Nausheen Shah is concerned, whatever I said was 100% true — that some people showed up forcefully. If someone who said she would silently ignore the situation is now passing comments, then I will gladly show the messages and voice notes, after which I got annoyed and finally sent her the location for the wedding. She annoyed everyone when she showed up, and she’s annoying everyone now too,” he added. 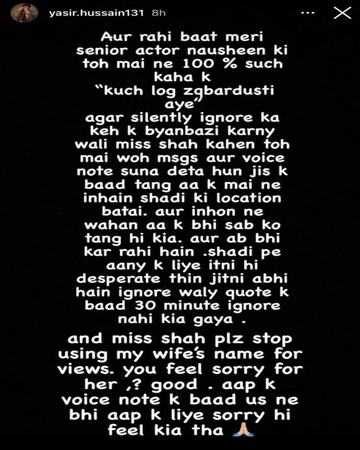 He went on to add if people want to watch a copy show of  Koffee with Karan they should have the same restraint listening to answers given by local celebrities.

Hussain also advised  Shah to stop using his wife Iqra’s name for views in Instagram posts. “She felt as sorry for you, as you feel for her when she first heard your voice notes,” 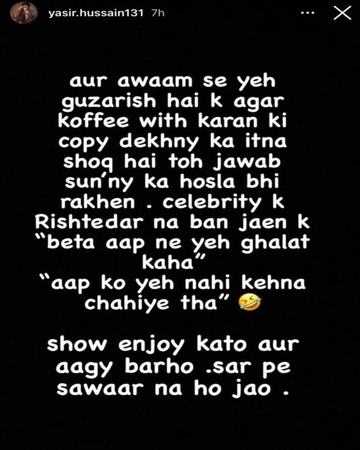 tweet
Share on FacebookShare on TwitterShare on PinterestShare on Reddit
Saman SiddiquiFebruary 25, 2021
the authorSaman Siddiqui
Saman Siddiqui, A freelance journalist with a Master’s Degree in Mass Communication and MS in Peace and Conflict Studies. Associated with the media industry since 2006. Experience in various capacities including Program Host, Researcher, News Producer, Documentary Making, Voice Over, Content Writing Copy Editing, and Blogging, and currently associated with OyeYeah since 2018, working as an Editor.
All posts bySaman Siddiqui