It all started when Yasir Hussain who has a history of mocking the airing of Turkish series on the national Tv, in his recent Instagram story, shared a tweet featuring pictures of the two Pakistani individuals having a remarkable resemblance to the Diriliş: Ertuğrul actors. The tweet termed the featuring fellows the ‘Pakistani Turgut and Pakistani Ertuğrul.’

Responding to the tweet, Yasir Hussain shared a bit harsh comments which did not go well to the fellow Pakistani social media users.

“Inko koi nahi poochyga , Kyunke ghar ki murgi daal barabar or bahar ka kachra bhi maal barabar ( No one will pay heed to them, because home-cooked chicken is equivalent to lentils while international garbage is still worth cashing in)”, he wrote. 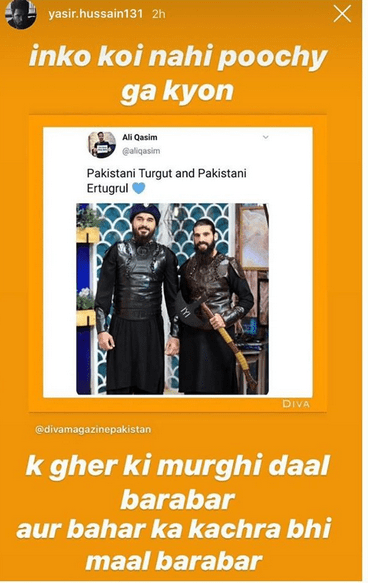 The case doesn’t rest here,  soon Yasir Hussain started to trend on top of Pakistani Twitter and netizens responded to his derogatory remarks:

Yasir Hussain the pain yaka need attention from the audience. For this regard he sometime make video with girl age of his daughter so called his wife and some time post cheap comments on Ertugrul. Don't give him importance. Just ignore

If Pakistan's entertainment industry had even a slight bit of merit, Yasir Hussain wouldn't even have made it to the theatres let alone hitting the big screen.

What a shit load of a person, really is an embarrassment for Pakistan. pic.twitter.com/Gq1De5zBT4

Who is Yasir Hussain and what has he starred in? 🤔 https://t.co/yn5XXOD1GR

The unfunny and poor actor Yasir Hussain showing his jealousy and insecurity at people more talented than him getting a platform pic.twitter.com/VR6VcJM7SE