Momina is struggling hard for her brother's survival 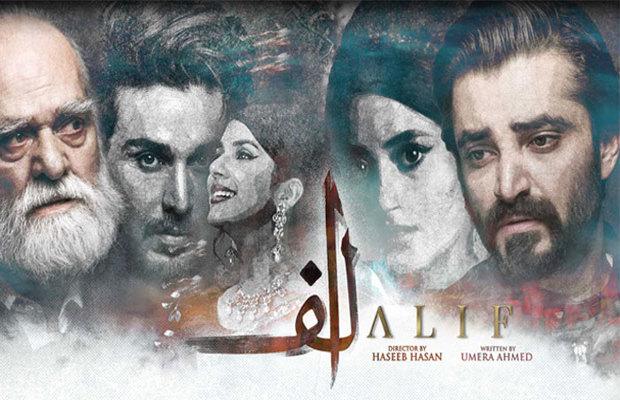 Drama serial Alif, running on Geo Entertainment is one of the most interesting and thought-provoking drama serials, based on Veteran writer Umaira Ahmed’s novel with the same title. Umaira Ahmed has beautifully penned down human relationships with the Divine Source, the Almighty Allah. The play moves around the lives of two characters Qalab-e Momin and Momina, both are poles apart but in some way or the other, they are connected to that same divine source in their own way. Hamza Ali Abbasi and Sajal Aly are for the first time coming together as an onscreen couple.

Qalab e Momin is too astray from the right path, he has been so indulged into this world of glitz and glamour. He is mocking Sufism on a Qawali night and says that its a very common fashion nowadays. For him being a filmmaker a Qawali has to do nothing to make the film a hit but it is always an item number which makes a film a huge hit! He is been called the Queen maker of the industry all he knows how to be popular and successful.

Momina on the other side is an exact opposite of Qalab e Momin. She just wants her connection with Allah strong but her worldly problems are not letting to live a peaceful life. Her brother’s kidneys are failing and she is helpless in doing anything for his brother’s survival. She is doing soap operas but she is not happy with her work plus she is not been acknowledged the way she should be.

There are lots of women around Qalab e Momin as he is the Queen Maker of the industry. He never repeats his heroine in the film. However, it seems that he is more close to the designer. The designer as it is shown that she has a boyfriend too who is so desperate to become the hero in Qalab e Momin film that he even threatens her girlfriend that he will break up if she fails to make Qalab e Momin cast him in the leads in his upcoming flick but Qalab e Momin behaves very coldly when he meets this guy.

Qalab e Momin has thrown a party at his house and in the mid of the party, his grandfather ‘dada’ arrives at his house! Qalab -e Momin is shocked and panicked to see him he is not expecting him he is more ashamed that he has not done any preparations as he knows that his grandfather do not like this dance party and he is religious. Momin’s dada is shocked to see a picture in his room instead of calligraphy and he learns from the servant that Momin does that before his arrival but this time he has not informed so he could not replace these pictures with his Calligraphies. Dada has realized that Qalab -e Momin is quite out of track and is heavily indulged in this materialistic and glamour world.

tweet
Share on FacebookShare on TwitterShare on PinterestShare on Reddit
Rameeza NasimOctober 17, 2019
the authorRameeza Nasim
Rameeza Nasim, a Paralian, passionate about poetry, drama and fiction. By giving drama critiques I feel like I am endorsing the writer's message to the audiences, I love my job. Being a critic responsibility lies on my shoulders to point out the flaws and shortcomings of the play be it on writer's , performers or director's end . I did my Masters in English Literature and Linguistics .
All posts byRameeza Nasim