Bobby thinks about how girls would fall at his feet at parties and how Dua is so indifferent to his “charismatic personality” which angers him more. 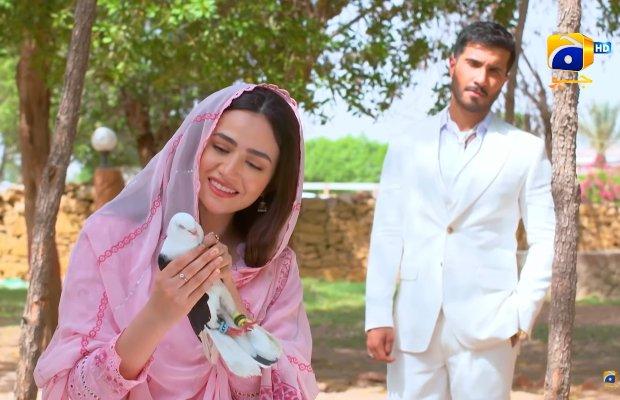 7th Sky Entertainment is back with yet another ambitious project after the stupendous success of Khuda Aur Mohabbat Season 3. It looks like the dynamic duo Abdullah Kadwani and Asad Qureshi will continue their winning streak with their new production “Aye Musht-e-Khaak”.

Mustajaab aka Bobby is a young, rich, multi-millionaire businessman who has spent all his life in the USA. He is arrogant, dashing, dapper, and self-absorbed. Dua belongs to a modest family who owns a farm. She is a student of Islamic Studies and is extremely religious. She is kind, considerate, the apple of her family’s eye, and values morals above everything else. She isn’t the one to be impressed by riches or flash but by the strength of their character.

The show also features a strong supporting cast which includes Shahood Alvi, Iffat Omer, Nimra Khan, and Asad Siddiqui among others. The plot of the show is how a rich, spoiled boy will go through a complete transformation in the name of redemption.

In this week’s episodes, we are introduced to Dua, a pious young girl. Her brother, Dayaan, is returning home after completing his MBA. Then there’s Bobby who has come home from the USA for two months. He took care of his mother after the death of his father and became a shrewd, self-centered businessman.

Bobby and Dua’s mothers, Shakeela and Nimra respectively, are cousins and childhood friends. She brings Bobby along with him to meet Dua’s family because she wants to get Dua married to Bobby.

While everyone is talking, Bobby comments on Dua’s choice of Islamic Studies for her Masters as easy and simple. She tells him girls are walking neck to neck with today’s boys. She also says he has nicknamed himself Bobby because it is easier and simple than his actual name, Mustajaab.

Dua and Bobby take a stroll along her farm. She stops to help a pigeon who has a thorn in its feet and brings a baby goat closer to her mother. During all this time, all Bobby does is talk at length about himself and of his magnetic personality. He confidently tells Dua about how girls are always throwing themselves at him.

Shakeela asks Nimra for Dua’s hand in marriage for Bobby. She tells Shakeela she will get back to her after asking Dua about it.

At the end of their meeting, Bobby is angry at how Dua isn’t like the other girls who fall for him in the first meeting. He can tell she isn’t interested in him at all. She didn’t compliment him nor did she sing his praises.

The next day, Nimra calls Shakeela and tells her that Dua doesn’t want to get married to Dua. Shakeela is disappointed but the rejection doesn’t sit well with Bobby’s ego. He becomes angry and livid at how someone can reject him.

Dua’s father asks her to think again before making a final decision about Bobby.

Bobby thinks about how girls would fall at his feet at parties and how Dua is so indifferent to his “charismatic personality” which angers him more.

Dua tells Dayaan she doesn’t want to go to America, so far away from her family. She wants to stay in the country so she doesn’t have to wait for a long time to see her loved ones.

Bobby refuses to go to Dayaan’s welcome party that Dua’s parents are hosting. He says he won’t present himself in front of a random, ordinary, worthless girl.

Despite refusing to come, Bobby shows up at the event. He forgets all his anger and frustration when he sees Dua and is in awe of her the entire evening.

Dua’s friends can’t get their eyes off of Bobby and drool over him during the event. They are surprised when they learn Dua rejected Bobby’s proposal.

At the end of the evening, Bobby can’t help himself and ends up asking Dua’s family if he can have a word with her. Reluctantly, they give him permission and the two meet again.

Bobby asks Dua why she rejected him. She says she didn’t reject him but his proposal. She tells him he has a strong personality and he should marry someone like himself instead of her.

At the end of the episode, Bobby ends up confessing his feelings for Dua which leaves her speechless.

The show has gotten off to an interesting start without wasting any time. It will be exciting to see what happens next.

Will Dua change her mind? Will Bobby win her heart? To find out, keep watching Aye Musht-e-Khaak on Mondays and Tuesdays, only on Geo TV and their official YouTube channel.