He asks her to reconsider her decision because he will do whatever it takes to keep her happy. 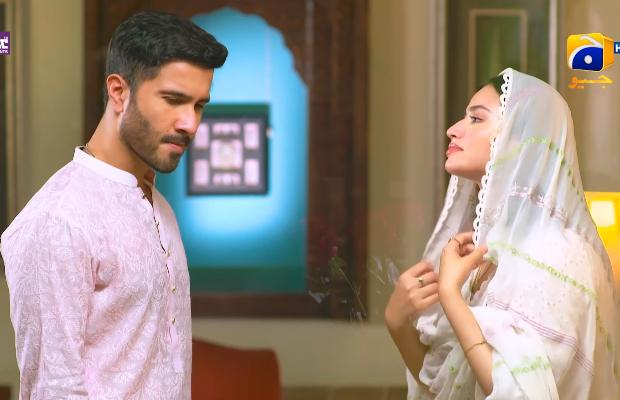 Aye Musht-e-Khaak has broken viewership records and has gathered unanimous praise from all over. The show has gotten everyone talking thanks to its performances, strong storyline, and high production value. Everyone has rejoiced after seeing one of their favorite small screen couples back on their television screens. Both Feroze Khan and Sana Javed have impeccable chemistry and a beautiful screen presence. 7th Sky Entertainment has knocked it out of the park and it’s only four episodes down.

This week continued right from where we left off at Bobby and Dua’s meeting. He asks her to reconsider her decision because he will do whatever it takes to keep her happy.

Bobby tells Shakeela he told Dua that he loves her. Seeing his restless state, she meets Dua’s family again and tells them Bobby will settle in Pakistan and Dua won’t have to go to America after marriage, which was Dua’s primary concern. Upon hearing that, Dua’s family agree on the proposal.

Before leaving, Shakeela tells Dua that Bobby loves her and is ready to do whatever it takes to win her over.

The egoist he is, Bobby wants Dua to have appreciation and feelings for him the way he has for her. He asks her out for dinner. Reluctantly, she agrees when her parents also give her permission.

Bobby asks Dua to pick the place for their dinner. She takes him to a roadside dhaba and makes him eat chicken karahi and daal fry. Both the things are too spicy for him but he is ready to eat them for her. Bobby tells Dua he likes everything she does and will do everything to give her a good married life.

That night, Bobby asks Shakeela whether they are in the wrong by lying to Dua and her family about America because he can’t leave everything there and move back to the country. Shakeela assures him that after marriage, Dua and her family will compromise.

Shakeela and Bobby show up at Dua’s place and Bobby puts a ring on her finger to make things official.

Bobby holds Dua’s hand but she forbids him to do so because they are both namehram after each other. To this, Bobby says he wants to become her mahram.

Shakeela and Bobby insist on fixing an upcoming date for the marriage because he wants to get married soon.

Dua tells her family she has a semester left and she can’t get married for the next six months.

Dayaan meets Bobby and Shakeela to tell them Dua’s decision which angers Bobby. He says Dua isn’t the last girl on the planet and storms off in a rage.

He cries in front of Shakeela who can see his feelings have taken the form of obsession and she is ready to do whatever it takes to make her son happy.

Dayaan tells his parents Bobby is aggressive, short-tempered, arrogant, self-involved, and egoistic. They shouldn’t marry off Dua to a man like that.

Nimra tells Shakeela over the phone about how Sajjad, her husband, and Dayaan aren’t in favor of Bobby after seeing him in his angry state. Shakeela tells Nimra she will talk to her in person.

Dayaan takes Dua out because he doesn’t want her to be home when Shakeela comes home and Bobby might accompany her. She also takes off the ring Bobby gave to her because she would be happy with the decision her family will make for her.

Will Dua finally agree on marrying Bobby? Will Shakeela convince Dua’s family? What will Bobby do now? To find out, watch this space for more and keep watching Aye Musht-e-Khaak on Mondays and Tuesdays at 8 pm on Geo TV.