A twist in the story comes in the face of Shiza, Bobby’s girlfriend who follows him to Pakistan from USA. 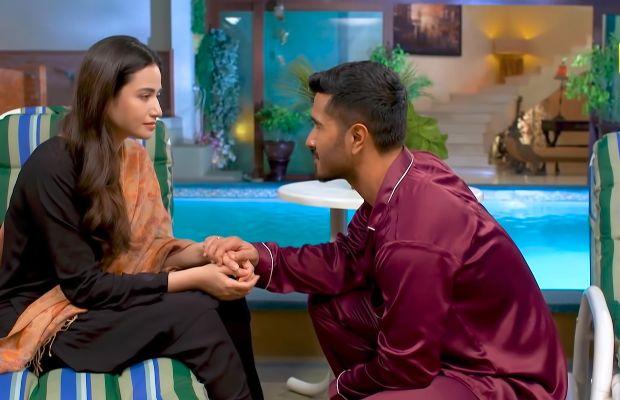 Aye Musht-e-Khaak has added itself to 7th Sky Entertainment’s list of their blockbuster shows. The show has everything that’s needed to make it a hit amongst the audience. It is intense, has a romantic storyline, complex characters, and how it tackles different everyday issues whether it is faith, morals, conscience, doing the right thing, or betrayal. These are elements that compel audiences to be hooked onto a show and that’s what’s happening with Aye Musht-e-Khaak. It is enjoying immense popularity and love from the audiences. Let’s see what happened this week in the show.

This week began with Dua coming to her home after feeling betrayed by Bobby. She cries but Dayaan tells her to get herself together so that their parents don’t see her like that.

Shakeela reveals to Bobby that it is because of his antics that she faked her heart problem episode.

Dayaan tells Dua despite all of the things Bobby has done, the positive aspect here is that he did all of it in Dua’s love.

Bobby tells Dua that he is facing a lot of loss in his business and he needs to leave for the USA but he won’t go without her.

Dua decides to leave her studies and go with Bobby much to her friends’ dismay, especially when she is about to secure the first position.

Nimra feels betrayed by Shakeela and Bobby. She tells Dua and Dayaan that they have lied to them every step of the way.

Dua overhears Bobby and Shakeela’s conversation about her fake heart attack and is shattered.

Dua comes to talk to Shakeela. It looks like she is about to tell her what she heard but instead, Dua tells Shakeela that she will do whatever it takes to fulfill this relationship.

Dua goes to see imam sahib and tells him her predicament. He tells Dua the people of faith remain steadfast. They are patient and resilient. Later, Dua prays that if it isn’t right for her, she shouldn’t go to America.

A twist in the story comes in the face of Shiza, Bobby’s girlfriend who follows him to Pakistan from the USA.

Dayaan tells Dua he will support her if she wants to put up a fight after everything Shakeela and her son have done.

Bobby tells Shakeela he will have to go with Shiza to the USA alone because if he doesn’t, she will sue him and create problems for him. This means Dua will have to stay in Pakistan during that time.

Bobby breaks the news to Dua who tells him the power of prayer. She prayed and the Almighty fulfilled her deepest desire that was buried in her heart.

Bobby tells Shakeela that Shiza was his girlfriend of two years. He told her that he would marry her but he had no intentions of doing that. One day she showed up at his place but he sent her away because he didn’t expect her to get into a lifelong commitment such as marriage because of her ways. Before leaving, she threatened to make his life a living hell.

What will happen next? Will Dua find out about Shiza? Will Bobby marry Shiza to avoid a court case? To find out, watch this space for more and keep watching Aye Musht-e-Khaak on Mondays and Tuesdays at 8 pm on Geo TV.