Dua’s family is worried for her. 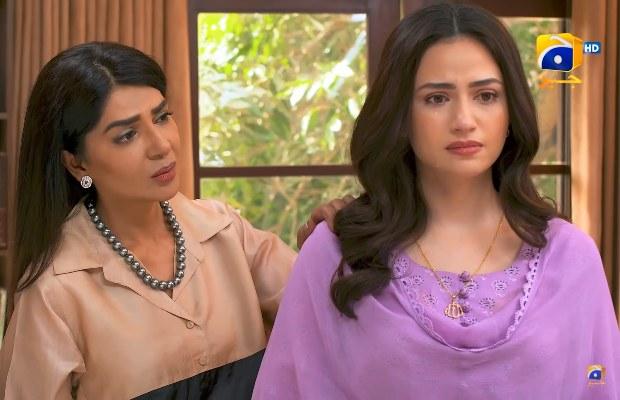 It has been a month since Aye Musht-e-Khaak went on air and so far, it is one of the most popular shows on television right now. Fans and critics are loving the dialogues, screenplay, and performances of the leads the amazing Sana Javaid and talented Feroze Khan as well as the supporting cast.

The last few episodes have packed in a lot more drama but this week took the cake for being explosive and eventful, to say the least. Safe to say that this 7th Sky Entertainment production has us hooked. Read on to find out what happened this week.

The show is tackling issues of faith, belief, and one’s relationship with the Almighty. It is about being with people who strengthen your bond with Him rather than weaken it. The director and writers are doing a fine job of putting that on the screen.

Continuing from the last episode, Dua’s family is worried for her. They keep asking her what’s wrong but she doesn’t tell them anything and continues to be worried and distraught because of Mustajaab. She calls Shakeela and asks her to meet her immediately.

Mustajaab and Shiza get into a huge argument after he finds out that she has contacted Dayaan and Dua. She keeps calling Mustajaab but he doesn’t answer Dua’s phone leading her to worry more. Dayaan consoles her and asks her to trust the Almighty.

Shakeela meets Dua and get worried because of her words and changed attitude. Dua asks her she knew about her family’s beliefs and faith, and yet she got Dua married to a man like Mustajaab who has no faith. Dua tells Shakeela if she asks Mustajaab and he says there’s no God, she will leave him.

When Shakeela tells Mustajaab, he tells her he doesn’t care what Dua thinks. She will have come and lived with him in the US the way he wants to and she won’t have any choice.

Seeing Dua’s upset state, Dayaan brings up the topic of his marriage with his friend, Taqi’s sister, Tabeen, to take Dua’s mind off of things and be happy about the aspect of his marriage. This is despite the fact that he has only met the girl once or twice in his life.

Dayaan confides in Taqi about everything that has been going on and why he made the decision to marry Tabeen.

Dua meets Imam Sahab who tells her that one who has gone astray from the path of the Creator is a vagrant and one shouldn’t associate themselves with them. After meeting him, Dua tells Dayaan that she has become more certain than before about her decision.

What will happen now? Will Dua leave Mustajaab? Will he be able to convince her of his beliefs? To find out, keep watching Aye Musht-e-Khaak on Mondays and Tuesdays at 8 pm on Geo TV.