Mustajab doesn’t believe his ears when he hears that Shakeela, his mother testified against him 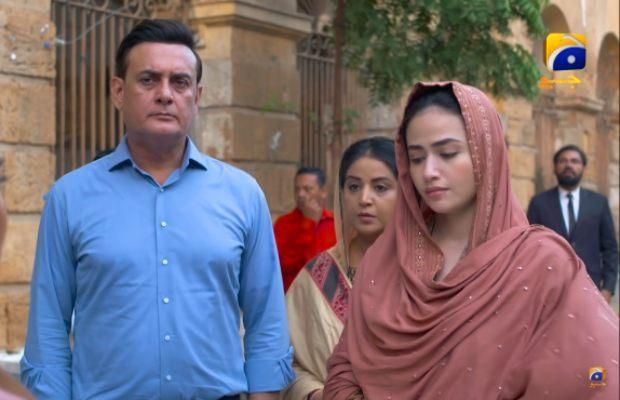 7th Sky Entertainment’s Aye Mushte-e-Khaak’s last two episodes were full of entertainment and drama. The show has reached the most interesting point of the show. Fans were eager to see what would happen of Dua and Mustajab and if Dua will win against him. This week’s episodes gave the audiences what they wanted. The performances and the screenplay were amazing as always. Read on to know what happened this week in Aye Musht-e-Khaak.

Shakeela comes to see Dua one more time but Dua and her family hand her divorce papers to dissolve Dua and Mustajab’s marriage. When Mustajab hears of this, he says there’s no one who can separate the two of them. Shakeela plans to drag them to court and prolong the case for as long as possible.

On the day of the hearing, Dua tells Shakeela to not ruin her afterlife by supporting Mustajab’s wrong ways. They urge her to speak the truth and save herself from burning in hellfire.

As she stands in the confession box, Dua tells the court that she wants a divorce because her husband has no faith and is a denier of God. Shakeela is next. She is asked to place her hand on Quran Sharif and take her oath to speak the truth. She is overcome with fear and repentance and admits to the court that her son Mustajab is indeed an atheist.

Mustajab doesn’t believe his ears when he hears that Shakeela testified against him and on that basis, the court has granted divorce to the two of them. At the end of the episode, Shakeela asks the Almighty for forgiveness.

What will happen now? What will Mustajab do with Dua? Will he fight her on this? To find out, keep watching Aye Musht-e-Khaak on Mondays and Tuesdays at 8 pm on Geo TV.