Read on to find out what happened this week in Aye Musht-e-Khaak. 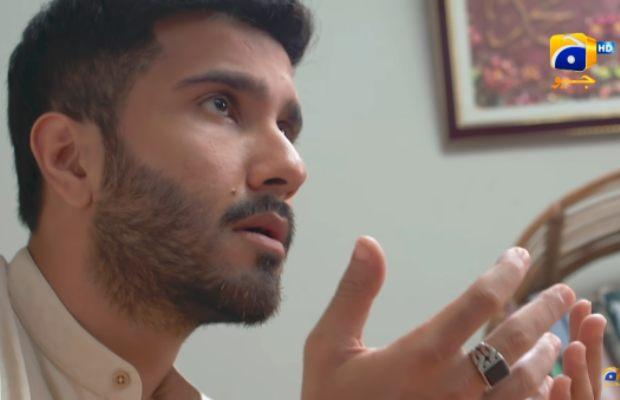 This week’s episodes of Aye Musht-e-Khaak especially the scenes between Mustajaab and Imaam Sahab were really powerful and deserve a lot of praise. The show remains just as amazing with brilliant dialogues, screenplay, and performances of Feroze Khan and Sana Javed. Shabbir Jan as Imam Sahab deserves a special mention. In this week, we see Mustajaab reverting to Islam and becoming a true believer in Dua.

Audiences are loving the show and the performances. The duo behind 7th Sky Entertainment Abdullah Kadwani and Asad Qureshi deserve praise for backing a story that’s made on a daring subject and putting it together so beautifully on screen. Read on to find out what happened this week in Aye Musht-e-Khaak.

Mustajab arrives at the masjid where Dua is with Taqi and hits while Dua intervenes. She tells him their paths are separate now. Taqi also tells his and Dua’s families about the whole incident which makes them worried.

Shahzad and Nimra show up to Shakeela’s place where Shazad slaps Mustajab in a fit of rage. He tells him to stay away from Dua.

Taqi asks Dua if she has a soft corner for  Mustajab. She tells him she has removed Mustajab from her life but it will take some time to remove all his memories.

Mustajab shows up at Imam Sahab’s mosque and reverts to Islam. He recites kalma and seemingly becomes a  Muslim.

Dayaan knows Taqi is refusing to marry Dua on her insistence. He advises Taqi to remain in contact with Dua and make a place for himself in her heart.

Imam Sahab suffers a cardiac arrest and Mustajab takes him to the hospital. Dua is surprised when she sees him at the hospital and learns what he has done.

Dua assures her family that she is not having second thoughts about Mustajab and she isn’t going back to him.

Shakeela knows all of it is just a façade that Mustajab is putting up to get Dua back in his life but this time she won’t support him because she wants him to fail.

Dua is talking to Mustajab on the phone when Dayaan arrives. He tells him his suspicions were right and he did all of it just so he could have Dua back. Dayaan ends the call by saying Mustajab has lost Dua forever.

What will happen next? Will Taqi marry Dua? Will Mustajab do something drastic to get Dua back? To find out, keep watching Aye Musht-e-Khaak on Mondays and Tuesdays at 8 pm on Geo TV.