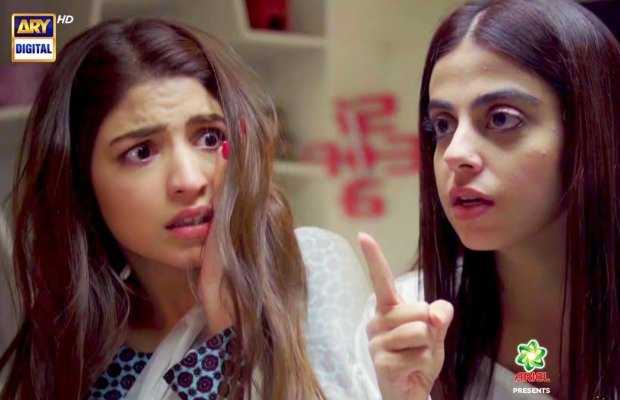 ARY Digital aired the 19th and 20th episodes of the drama serial Azmaish, a play that has successfully created our interest in the story. The story premises are quite different, although it is based on sibling rivalry, but the treatment of the play is nicely done. In the previous episode, we have seen that Samreen’s phupho is all set to take his son’s proposal for her and in this episode, Samreen’s father rudely refuses the proposal moreover he drags poor Nimra into the whole matter saying that he can marry Nimra if he wants.

The story takes a drastic turn when Phupho brings Rohan’s proposal for Samreen but Samreen’s father very arrogantly refuses his proposals, insults them, and says that if they really want Rohan to marry, he can marry Nimra. Rohan instantly agrees to say that it is okay now he will marry Nimra. Nimra hears all this and she is in a state of shock.

Well how brutally Nimra’s stepfather hates him, he is as proud and as arrogant as his daughters. Why did he need to drag poor Nimra in this whole matter? Why he even needs to name her in front of the guests? Nimra and her mother never bothered him so why he is treating them like trash just because he has a  humble background? This is too much for Nimra and this time again her mother fails to protect her why her mother is not taking a stand for her?

Shiza is behaving as if she is going to kill Nimra, she brutally insults Nimra and her mother, Basit intervenes and he takes Nimra’s side saying that if Rohan wants to marry Nimra there is no harm in it making Shiza even angrier. Rohan also hears at the door Shiza trashing Nimra and there he has made up his mind that he will now marry Nimra only as he truly wants to give her happiness and the protection she deserves. Now at this point, we also hope that Rohan marries Nimra so she comes out of this toxic atmosphere.

Well, initially it seems that Rohan takes Nimra’s name in anger or in a way to satisfy his ego but here it does not seems the case. It seems that he has true feelings for Nimra despite her refusal in front of all. Rohan calls her and there he is showing interest in her, however, she tells him that she cannot marry her because Samreen likes him. Shiza catches Nimra talking with Rohan and gives her a tight slap on her face. Poor Nimra seems clueless she is so unfairly dragged into this matter by his cruel stepfather. Well, Rohan might prove himself a knight in shining armor for poor Nimra, we hope so!

tweet
Share on FacebookShare on TwitterShare on PinterestShare on Reddit
Rameeza NasimJuly 29, 2021
the authorRameeza Nasim
Rameeza Nasim, a Paralian, passionate about poetry, drama and fiction. By giving drama critiques I feel like I am endorsing the writer's message to the audiences, I love my job. Being a critic responsibility lies on my shoulders to point out the flaws and shortcomings of the play be it on writer's , performers or director's end . I did my Masters in English Literature and Linguistics .
All posts byRameeza Nasim