Azmaish the drama serial airing daily at ARY Digital is down with few more episodes and here is a weekly overview of the play. The story has moved quite fast in these episodes. Poor Nimra has lost her mother. Shiza gets hit with a bullet in a snatching incident and we have seen that Shiza’s heart starts melting for Basit.

Nimra meets her real father, she is shown too naive as has always heard negative things about her father how greedy he was but with only a single meeting her father has been successful in brainwashing her against her mother. She yells at her mother for the very first time and starts blaming her for keeping her away from her father and lying with her all her life. Poor Mother cannot bear all this burden, she takes it to her heart and dies. Nimra lost her mother and with her death, she starts blaming herself and she is being nicer to her stepfather.

If she thinks that her mother is not lying and she is being nice to her stepfather then why she is being still in contact with her real father? and if she believes that whatever her real father is saying is correct then why she is still living in her stepfather’s house?  Samreen’s character is again making no sense at all. She is being unnecessarily toxic with her loving and caring Phupho, it’s all Shiza’s feeding and Samreen is merely a puppet in her hands spoiling her own relationships following her stupid advice.

Shiza is still after Nimra she cannot stand her presence in this house, she wants to get rid of her, she asks her to go back to her father’s house to which she declines by saying that she does not want to live with him. Nimra gets a job but Shiza is not happy with it all she wants is to make her work like a maid in the house. In real Shiza does not deserve Basit at all. Nimra’s loafer rickshaw driver cousin is after her now.

Shiza and Basit are leaving for office when snatchers come across their way and demand stuff. They were giving everything without resistance but then a snatcher touches Shiza’s hand which maddens Basit and he starts beating the guy without realizing the consequences. Eventually, Shiza gets a bullet but luckily she is saved. This incident has melted Shiza’s heart for Basit, it seems like Shiza is a damsel in distress and he is her knight in shining armor. Shiza although is not expressing much but Basit has won a place in her heart by fighting for her. Despite the fact that she has to take a bullet for him, she is now craving for his presence.

tweet
Share on FacebookShare on TwitterShare on PinterestShare on Reddit
Rameeza NasimAugust 19, 2021
the authorRameeza Nasim
Rameeza Nasim, a Paralian, passionate about poetry, drama and fiction. By giving drama critiques I feel like I am endorsing the writer's message to the audiences, I love my job. Being a critic responsibility lies on my shoulders to point out the flaws and shortcomings of the play be it on writer's , performers or director's end . I did my Masters in English Literature and Linguistics .
All posts byRameeza Nasim 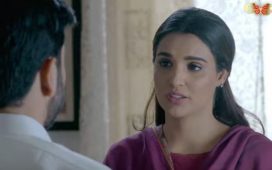