Nimra gives all her jewellery to his greedy father 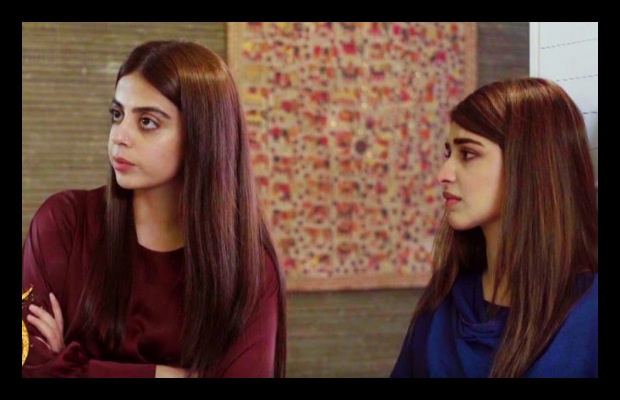 Azmaish the drama serial airing daily at 7 pm at ARY Digital has turned a bit tedious with repetitions. Shiza and Basit’s relationship and their fighting pattern are quite repetitive so are Samreen and Rohaan’s. Even in these episodes, Basit is seriously thinking about separating from Shiza and giving their relationship a second thought. Nimra is shown too naive to trust her greedy father, she despite knowing that her greedy stepfather will never approve gives all her jewellery to him.

Shiza’s heart starts beating for Basit but it is now Basit who is giving her a cold shoulder. He seriously thinks that they both should give their relationship some time and I guess he is right about how long he can drag a loveless hallow relationship. We know that deep inside he still has feelings for Nimra but now Shiza has turned extremely possessive towards Basit she cannot bear Basit talking with Nimra which is in real turning off Basit for Shiza. Despite Shiza’s insisting Basit is resolute that he will shift to his own house.

Another dragging repetition is Samreen and Rohaan’s track. Samreen’s unnecessary unreasonable misbehavior with her own Phupho is not making any sense. Shiza’s taking interests in her sister’s home matters and her ego against her own phupho is making her an extremely problematic character and also Samreen has no brain of her own, she is ruing her relationship with Rohaan with her own hands.

Nimra is a character who has lost all our sympathies, in fact, she has turned annoying for being that naive. She believes her mother and she has always heard from her mother about her father’s meanness and his habit of gambling still Nimra is stupid enough that she gives all her jewellery that her mother has made from her stepfather’s money to his father despite knowing that it is going to badly hurt her stepfather.

Nimra’s cousin’s character is also not making any sense. Why he does not go against his Chacha knowing that he is deliberately exploiting his own daughter? Why he has not called Tufail when his Chacha comes back at his house again? Why Nimra is so blinded by her father’s love that she cannot see his never ending greed. Shiza is still after Nimra, she wants to get rid of her as soon as possible at any cost. She is making a secret deal with Nimra’s father cashing his greed by offering him a hefty amount of money if he takes away Nimra and keeps her with him. Will Shiza succeed in her plan?

tweet
Share on FacebookShare on TwitterShare on PinterestShare on Reddit
Rameeza NasimAugust 26, 2021
the authorRameeza Nasim
Rameeza Nasim, a Paralian, passionate about poetry, drama and fiction. By giving drama critiques I feel like I am endorsing the writer's message to the audiences, I love my job. Being a critic responsibility lies on my shoulders to point out the flaws and shortcomings of the play be it on writer's , performers or director's end . I did my Masters in English Literature and Linguistics .
All posts byRameeza Nasim