Junaid is not ready to accept Abeer 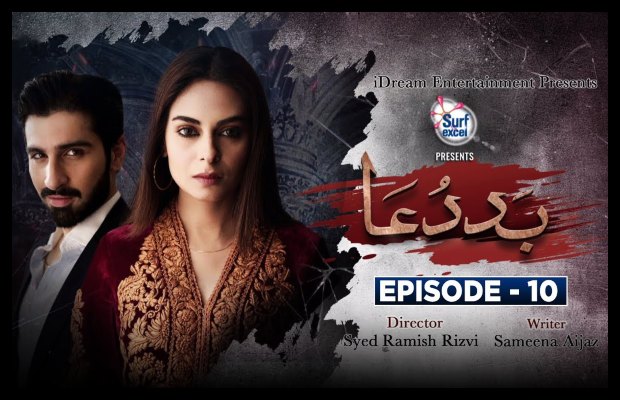 Baddua drama serial airing at ARY Digital has taken a drastic turn with Junaid showing his true colors to Abeer. Performances are simply on point. In the previous episode, we have seen Abeer kind of paying for whatever wrong she has done with others as Junaid is giving her some really tough time. In this episode too Junaid gives Abeer a reality check.

Junaid tells Abeer that he is taking her to Neelum’s place so that he can make her feel jealous. Abeer also has an evil mind instead of stopping her husband from committing that stupid act she in fact encourages him and they both go to her place. Well, one wonders why Neelum has let them come into her house she should have to shoo them away from the gate.

Junaid is stooping too low as he is trying to make Neelum envious but he is facing a failure in that and it is disturbing him. Neelum is calm and chilled, she says that she is happy that they both have married each other as they both are similar and they truly deserve each other. This sentence has hit Junaid harder and he now starts doubting Abeer’s character.

Junaid is doubting so hard that in his mind he has made up that Abeer has a tinted character, maybe he is doing that because Abeer has also stolen him, knowing that he is her best friend’s fiance. Junaid gets so mad at Abeer that he throws her out of her car and leaves her in the middle of the road and goes to meet his girlfriend. Despite Junaid’s girlfriend’s reluctance, Junaid succeeds in trapping her by saying that he is not happy with his marriage. It seems that he is a habitual womanizer, just like Abeer who used to flirt with men. So they both truly deserve each other.

Abeer is facing her in-laws bravely, she is not shying out to speak for her rights. She tells his family that how he has left her in the middle of the street like that. Later when Junaid comes back she tries to initiate a fight but she is shocked when Junaid tells her that what Neelum says about her is her past. He says that he will dig out her past no matter what happens and he will not going to spare her. Abeer fears that what going to happen when he comes to know about Mohsin or Umair. Junaid then throws him out of his room too. Junaid is certainly giving Abeer a reality check!

tweet
Share on FacebookShare on TwitterShare on PinterestShare on Reddit
Rameeza NasimNovember 23, 2021
the authorRameeza Nasim
Rameeza Nasim, a Paralian, passionate about poetry, drama and fiction. By giving drama critiques I feel like I am endorsing the writer's message to the audiences, I love my job. Being a critic responsibility lies on my shoulders to point out the flaws and shortcomings of the play be it on writer's , performers or director's end . I did my Masters in English Literature and Linguistics .
All posts byRameeza Nasim