Affan start being reserve with Neelum 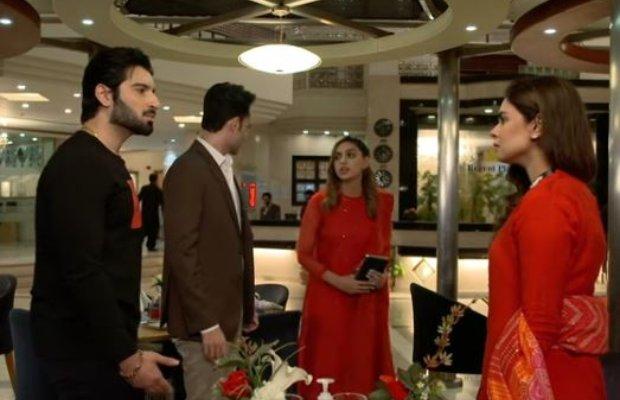 Baddua the drama serial airing at Ary Digital is an interesting prime time watch. Performances are also on point. In the previous episode, we have seen that out of nowhere Junaid turns into a very nice person and he starts being caring with Abeer. In this episode, it is shown that Junaid finds out that Neelum is the one his best friend Affan is married to.

Junaid is now all good and lovey-dovey with Abeer. His sudden and unbelievable transformation is hard to digest and it is not going well with his flamboyant character. Abeer is living a smooth and happy life then what about the bad things she has committed in her life and karma? It seems that Umair will teach her a lesson soon as he is after her hounding her by his calls.

Affan and Neelum are enjoying a happy married life. Affan’s sister and mother have moved to Australia. Neelum and Affan are living with Mohsin’s mother. Junaid has recovered from his injury and he has joined his office back. Umair is continuously hounding Abeer by making calls and at times in Junaid’s presence too Abeer’s phone rings but Abeer is successful in covering it up by saying that it is his mother’s or sister’s call.

Junaid invites Affan and his wife for dinner at a hotel. Junaid is shocked to see Neelum coming with Affan and Neelum is more shocked and disturbed to see Junaid and Abeer, she tells her husband that she does not want to see their faces. Abeer is such a vile girl that she starts demeaning her in front of Affan saying that she is dying to marry Junaid but Junaid married her. Neelum cannot stand this and leaves the place. Affan follows her and they silently sit into the car. Affan asks Neelum for an explanation for her rudeness.

Neelum tells Affan that her parents have told him that before his proposal, her wedding has been almost fixed but the guy ditched her and Junaid is that guy. This explanation should have been sufficient for Affan but he starts doubting Neelum thinking that she must have feelings for Junaid. We do not expect Affan to be that weak! Affan’s behavior is not going well with his character. Abeer, on the other hand, has created a lot of fuss in this situation, she is telling Junaid to break his lifelong friendship with Affan which Junaid is not ready to break. Junaid’s mother is too good to be true the way she is taking Abeer’s side. Anyways hoping that Neelum will be able to convince Affan that she only loves him and Junaid is nothing for her.