Junaid wants to marry his friend but his family has other plans they even found a girl for her isn't it too quick? 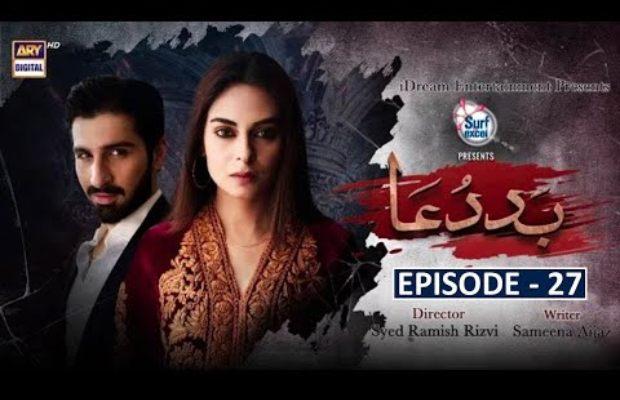 Ary Digital drama serial Baddua has turned quite wishy-washy despite having engaging content. This episode, in particular, is quite dragged and the story has not progressed much except that Kamaran still wants to marry Falak despite his mother’s fierce opposition. In the previous episode, we have seen how Abeer has spoiled Falak’s Mayon function by making her sudden entry.

Falak’s parents are grieving their fortune and cursing Abeer for spoiling Falak’s wedding function. They have low hopes with Kamaran’s mother who will call off the wedding. Kamaran’s brother has already told Kamaran and his mother all reality of Abeer and after that Kamran’s mother is resolute that she does not want any relation with that family.

Well surprisingly Kamaran displays some sanity, he persists that he wants to talk with Falak’s parents and wants to come up with a reasonable solution, he is not in favor of calling off the wedding. He still wants to marry Falak and his point is valid that whatever Abeer did has nothing to do with Falak she is a different person. Kamaran takes his mother to Falak’s place where despite seeing Falak’s parents’ helplessness Kamaran’s mother calls off the wedding and Kamaran could not do anything.

Abeer has no shame or guilt over ruining her sister’s happiness. She very casually tells Falak to move on. Falak is the only sane person in the house, she has accepted this refusal very gracefully and she is comforting her parents telling them to accept this as Allah’s will and be content. Falak has not cried like hell nor she is begging Kamaran not to call off their wedding so he can save their Family’s izzat. Falak is doing nothing like that our drama heroines should be like Falak caring for their own self-respect.

Well, one wonders what Umair and his friend are up to? Umair definitely has some sinister plans to ruin Abeer and Abeer is currently not in a mood to reflect on her past conduct and redeem herself, it seems that she will get trapped by Umair and he will be the person who will teach her a lesson that she is never going to forget. Neelum and Affan are happy shopping for their coming baby whose name and gender Chachi has already decided, how come she is so sure that it’s a boy? Junaid wants to marry his friend but his family has other plans they even found a girl for her isn’t it too quick?

tweet
Share on FacebookShare on TwitterShare on PinterestShare on Reddit
Rameeza NasimMarch 22, 2022
the authorRameeza Nasim
Rameeza Nasim, a Paralian, passionate about poetry, drama and fiction. By giving drama critiques I feel like I am endorsing the writer's message to the audiences, I love my job. Being a critic responsibility lies on my shoulders to point out the flaws and shortcomings of the play be it on writer's , performers or director's end . I did my Masters in English Literature and Linguistics .
All posts byRameeza Nasim