Neelum breaks her engagement with Junaid 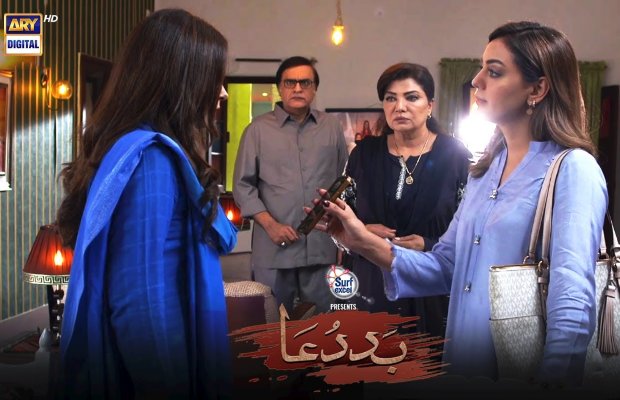 Ary Digital drama serial Baddua is three-episode down, this week they have aired a single episode only. The story is quite fast-paced and this is the best thing about the play. In the previous episode, it is shown that Mohsin commits suicide and his mother curses Abeer and blames her for his death. In this episode, Neelum exposes Abeer in front of her father by showing them pictures of Junaid and Abeer dating together.

The episode begins when Neelum catches Junaid and Abeer having a date in a restaurant. Neelum is smart enough that she snaps pictures of both together and then she has made up his mind that she will leave Junaid. The best thing about Neelum is that she is not shown as a typical pathetic girl who keeps crying, although she is heartbroken, she has a spine.

Abeer is shown such a mean and selfish girl that she dares to date a boy despite having so many troubles in the house, her dadi is hospitalized. Abeer’s sister when trying to put some sanity in her head she starts being rude to her and she is so mean that when her sister threatens her that she will tell her father about her activities she says go tell him so he will get a heart attack and die. She utters such words so casually and conveniently.

We love the way Neelum insults Junaid and breaks her engagement with him by throwing the ring on the floor. Junaid deserves all this. Thank God Abeer is not shown as some typical clingy woman who begs the boy to stay in a relationship in fact she has the guts to throw someone not worthy to have out of the relationship. Junaid is shown as a typical flirt, it seems that he has no intentions of marrying Abeer.

Neelum does not stay quiet on this, she goes to Abeer’s house and trashes her in front of her parents. She exposes Abeer by showing them their picture together in a cafe having a date. Abeer’s father is in a furious rage, he is about to kill her. Abeer still has the audacity to talk with her mother and she told her that she loves Junaid to bits and wants to marry him only. She further tells her mother that she will never marry the boy her dadi and Abbu are fixing her marriage with. The poor mother is terrified as her husband is all set to marry off Abeer as soon as possible.

tweet
Share on FacebookShare on TwitterShare on PinterestShare on Reddit
Rameeza NasimOctober 5, 2021
the authorRameeza Nasim
Rameeza Nasim, a Paralian, passionate about poetry, drama and fiction. By giving drama critiques I feel like I am endorsing the writer's message to the audiences, I love my job. Being a critic responsibility lies on my shoulders to point out the flaws and shortcomings of the play be it on writer's , performers or director's end . I did my Masters in English Literature and Linguistics .
All posts byRameeza Nasim