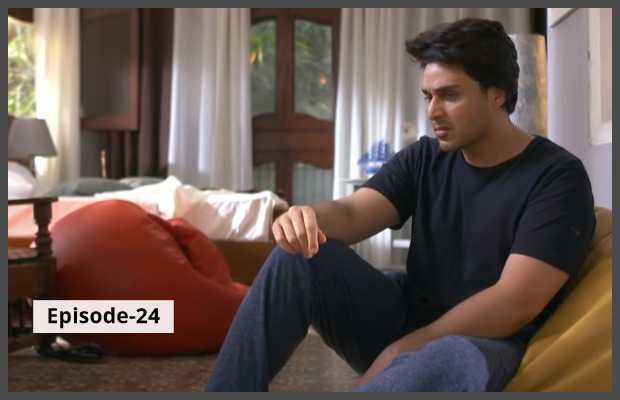 Bandhay Ek Dour Se, the drama serial airing at GEO Entertainment is a light heart romantic comedy, but the best thing about this play is that most of its characters are shown in a positive light, they do have flaws but they are more human-like. They are not completely bad or good. What we love the most about this play are the supporting cast and their brilliant performances.

Monis is asking Maheen the real reason why she does not want to live with Omar but she is avoiding to reply. He insists because Omar’s parents are coming to take her back and he needs some ground on which he can talk with them but when Maheen hears about his Taya Abba coming she gets panicked. She is fearing that how she will face them. She locks herself up in the room.

Roshini comes to meet Maheen and there she spares no moment to spew her venom on poor Maheen. She suggests that she has to be strong and firm on her point and she should be resolute in front of her Taya and Tayee so that this relationship is going to end so that Omar and she can marry each other. Poor Maheen agrees with what Idiotic suggestions Roshini has given her. Maheen is preparing in front of the mirror about what she is supposed to say in front of her Taya.

It is shown that Omar is missing Maheen, he is continuously seems lost in her reveries. It seems that Maheen’s leaving him has hurt him badly but he is not ready to face the reality that this is hurting him and also that he is missing her. It is true that when Roshini mentioned divorcing Maheen it has disturbed him. It seems that Omar is developing some feelings of affiliation for Maheen.

Omar’s parents get hit by a car accident. Omar’s mother is slightly injured but his father is critically injured. Maheen and her family go to the hospital to see her Taya Tayee, it seems that Omar’s parents’ accident has somehow saved Maheen and Omar’s marriage otherwise Roshini has not spared any chance for Maheen. She would have ruined her house by following mean Roshini’s advice. We have also seen Mansoor’s wife feeling not well looks like that they are going to have a good news. It seems that Omar’s injured parents may help in reuniting Omar and Maheen.

tweet
Share on FacebookShare on TwitterShare on PinterestShare on Reddit
Rameeza NasimOctober 16, 2020
the authorRameeza Nasim
Rameeza Nasim, a Paralian, passionate about poetry, drama and fiction. By giving drama critiques I feel like I am endorsing the writer's message to the audiences, I love my job. Being a critic responsibility lies on my shoulders to point out the flaws and shortcomings of the play be it on writer's , performers or director's end . I did my Masters in English Literature and Linguistics .
All posts byRameeza Nasim