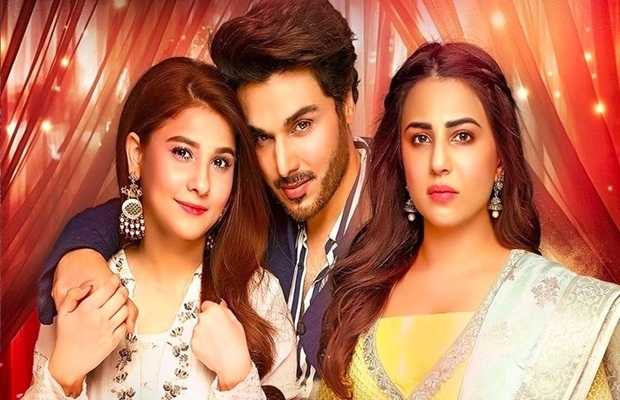 Bandhay Ek Dour Say drama serial airing at GEO Entertainment is a refreshing one, where we can see a perfect depiction of family ties and relationships. Here the best thing about the play is its cast, supporting cast is more entertaining than the lead cast. This serial which initially seems like a comedy of errors is now getting more intense. Ushna Shah’s performance is outstanding in this episode.

Maheen’s wedding preparations are in full swing and poor Maheen is so worried and eager to tell Omar the whole thing about Roshini but Omar is not taking her seriously, he is not even caring that she is having a fever. Roshini on the other hand is fully enjoying her stay at Nabeel’s house, she is swayed by Nabeel’s luxurious lifestyle but she gets a reality check when Nabeel’s relatives call her a maid and no one literally no one corrects her. Well that scene seems a bit over the top, she is not looking like a maid nor Nabeel’s mother should stay silent on that well it has badly hurt Roshini but it feels so satisfying because this is the treatment that Roshini truly deserves.

Well this Roshini and Nabeel part is not making any sense, it seems to be quite over the top and too much exaggerated. If Nabeel and his mother are not interested in Roshini then why Nabeel takes all the pain of bringing her all the way from another city and what is the use of keeping her in the house when she is not even a maid? It seems so inappropriate that even her mother is also sensing that their manner is quite inappropriate. Roshini has literally no feelings for her best friend Maheen who is getting married. Well, on the other hand, poor Maheen is trying his best to tell Omar even at her Mehndi stage but Omar is busy in dancing.

Maheen’s groom’s father out of nowhere demands a car in the dowry. They are not even realizing the status of Maheen’s mother, she is a widow and all her financial condition is quite evident from her living style. Well, Omar’s father is trying to sort out the matter but they are showing no flexibility. They have postponed the nikkah which is supposed to happen on Mehndi night and they have given the family one day notice if they can fulfill their demand, only then Maheen’s Nikkah is going to happen. Poor Maheen gets fainted on hearing this.

Roshini is still expecting that Nabeel’s mother is thinking her to make her daughter in law, she is giving that kind of impression that she will talk about her mother to let her stay in their house. I mean if she is not meant to marry Nabeel then why they are so eager to keep her in their house when they already have a fleet of maids in their house. Roshini gets the biggest shock when she hears Nabeel’s mother saying that when she will start living with her she will try to marry her off to a good place otherwise her mother will say that her rich friend has not taken care of her poor relations. Roshni is so broken to hear this, she feels so insulted but we as the audience feel so satisfied this is exactly what a mean girl like Roshini truly deserves.

tweet
Share on FacebookShare on TwitterShare on PinterestShare on Reddit
Rameeza NasimJuly 31, 2020
the authorRameeza Nasim
Rameeza Nasim, a Paralian, passionate about poetry, drama and fiction. By giving drama critiques I feel like I am endorsing the writer's message to the audiences, I love my job. Being a critic responsibility lies on my shoulders to point out the flaws and shortcomings of the play be it on writer's , performers or director's end . I did my Masters in English Literature and Linguistics .
All posts byRameeza Nasim