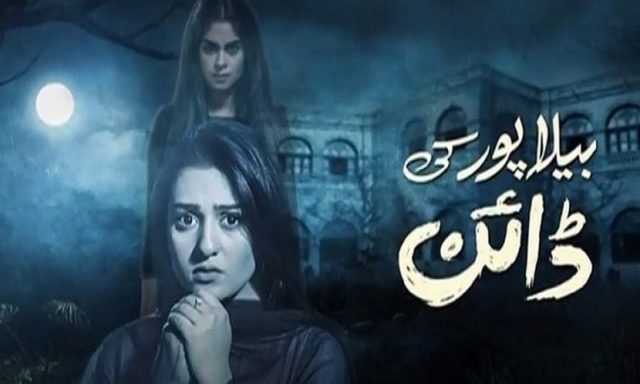 The most popular and much loved horror play ” Belapur Ki Dayan” ended yesterday as its last episode aired. And yes, without any doubt or second thoughts, we have to give it to Amar Khan who owned the serial. Yes, the script for Belapur Ki Dayan by Enam Hassan was a very strong one but Saife Hassan’s brilliant direction and the way his actors lived the characters, made it a perfectly executed play. This is how brilliant dramas are made, when team work is put up with complete dedication.

In Pakistan where horror dramas have usually made a fool out of themselves, Belapur Ki Dayan, gave us the chills. This story, was not only interesting but its execution, kept close to reality, made the drama relatable, so much so that, adults and kids sat glued to their television screens to watch one episode after another.

The last episode begins when Rehmat chacha is narrating his side of story that when he came back and he saw his whole family dead, he knew Aziz was behind everything. But the cunning Aziz had bribed the police and they arrested Rehmat instead. However there was one thing that made us wonder; how did Rehmat  Chacha know the way how Aziz had mudered his sister Neelo? He was not present at home so how could he say and that too confidently that Neelo’s dead body was hidden at the roof.

Ghainda helps Rameez to see the future where he forsees that Wajdaan is in danger. Almost all characters including the police head to the courtyard of Karamat House and there they see Neelo holding Wajdaan and threatening to kill him. However, it is these threats that bring out the confession fron Aziz about the murder of his step father, sister in law and Neelo.

Till the end, we had a hunch that Neelo, the evil dayan, would avenge all the wrongs that Aziz had committed against her, but then, good prevailed and she spared just about everyone. Justice was served and Neelo found peace. Tasha came back to life because Neelo spared her and Wajdaan. All’s well that ends well. And so, Rameez, decided to move back to his old flat, putting everything behind and starting afresh.

We have to give it to the two ladies, Sarah Khan and Amar Khan for carrying Belapur Ki Dayan very successfully on their shoulder. The two woman gave us the chills whenever they appeared onscreen together. The possessor and the possessed, Amar Khan and Sarah Khan were superb, especially Amar and the way she trasitioned from the naive Neelo to the ravenous dayan, exceptional acting delivered by this starlet, who is only two dramas old!

tweet
Share on FacebookShare on TwitterShare on PinterestShare on Reddit
Rameeza NasimJune 29, 2018
the authorRameeza Nasim
Rameeza Nasim, a Paralian, passionate about poetry, drama and fiction. By giving drama critiques I feel like I am endorsing the writer's message to the audiences, I love my job. Being a critic responsibility lies on my shoulders to point out the flaws and shortcomings of the play be it on writer's , performers or director's end . I did my Masters in English Literature and Linguistics .
All posts byRameeza Nasim