Mansoor snubs Kamaran for naming his house papers against Sabeen 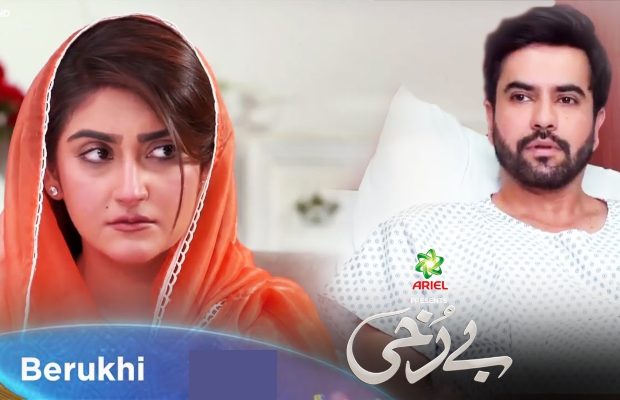 Berukhi the drama serial airing at ARY Digital is full of intrigues. The play is tedious yet it somehow manages to hook the interest of the audience. In the previous episodes, we have seen that Irtiza has developed some sort of misunderstanding about Sabeen. In this episode Irtiza confronts Sabeen and as a result, Sabeen gets mad at him.

Irtiza insists Qasim bring Sabeen as he urgently needs to talk with her. Qasim goes to her university and tells her about Irtiza being hospitalized. As Sabeen already has developed feelings for Irtiza she really gets worried on hearing about his injury. She agrees to go with him to the hospital but she is wise enough to go in her own car.

Sabeen goes to Irtiza’s room, she is astonished to see the number of guards as his private security. She inquires about his security on which Irtiza taunts her that why she is posing to be that innocent. He further says that when she knows that she is marrying him then why she is pretending as if she does not know him on which Sabeen gets startled she has no idea what the hell Irtiza is talking about. She tries to clear that she nor her family does not know him.

Well Irtiza is in no mood to hear Sabeen’s clarification, he straight away tells her that he is not going to marry her on which Sabeen gets mad at him, he only utters Thank you and walks out of the room. Irtiza is overreacting he is telling Qasim that he can never marry Sabeen and he is saying that she looks too cunning but one wonders how come he pass such remarks for her about what she has done. On one side he is in love with her and then his overreaction is not making any sense at all.

Kamaran is really a bad guy, he is involved in some criminal activities and he has plans for another crime too he may kidnap or kill in order to get rid of the girl with whom he is currently flirting. Kamaran brings cards for choosing and also he cunningly makes Sabeen’s mother agree to Nikkah’s date. Mansoor reminds Kamaran of house papers on which he says that what’s the hurry. Mansoor snubs Kamran telling him that if he cannot arrange the papers then he can call off this nikkah as Sabeen is not a burden for him. Kamran is resolute that he will take his insult’s revenge from Sabeen well to the level of criminal mindset he has he can exceed to any limit.

tweet
Share on FacebookShare on TwitterShare on PinterestShare on Reddit
Rameeza NasimNovember 18, 2021
the authorRameeza Nasim
Rameeza Nasim, a Paralian, passionate about poetry, drama and fiction. By giving drama critiques I feel like I am endorsing the writer's message to the audiences, I love my job. Being a critic responsibility lies on my shoulders to point out the flaws and shortcomings of the play be it on writer's , performers or director's end . I did my Masters in English Literature and Linguistics .
All posts byRameeza Nasim