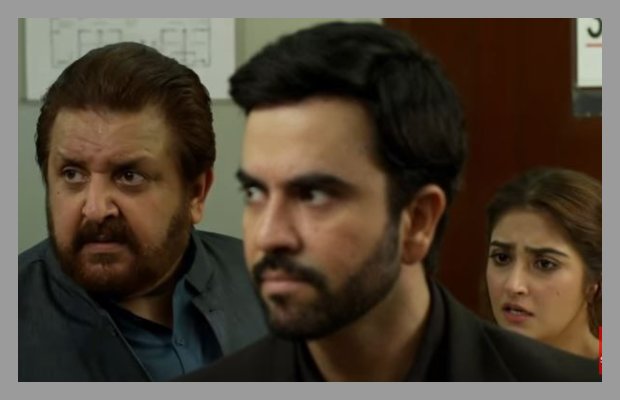 Berukhi the drama serial airing at Ary Digital is 14 episodes down. The performances are on point. In the previous episode, we have seen that Sabeen leaves her Mayon function in the middle to visit an orphan girl at a hospital who is critically injured, where Kamran catches her with Irtiza consoling her and he starts blaming her for having an affair with Irtiza. In this episode, Mansoor Ahmed gives Kamran a shut-up call and cancels his nikkah with Sabeen.

Irtiza is consoling poor Sabeen who is too worried for the injured girl when Kamran enters the scene and he catches both of them together. Without even getting any assurance he starts blaming Sabeen for dating Irtiza by making an excuse of visiting that injured girl. Sabeen is shocked to hear Kamran accusing her of having an affair with Irtiza. Moreover, Kamran also slaps hard on Sabeen’s face.

Mansoor Ahmed appears like a savior for Sabeen he slaps Kamran hard telling him that he has shown them his real face and that after seeing his true face he will never think of marrying his beloved niece with him, he on the spot cancels Sabeen and Kamran’s nikkah. Poor Sabeen is saved but Kamran created a lot of fuss by going back to the function and there he defames Sabeen in front of the whole family.

Sabeen’s mother once again takes all this insult to her heart and her condition gets worse she has been hospitalized. Irtiza is there with them. Maira and Nazia are extremely worried when they come to know that Kamran has also misbehaved with Irtiza. They both are fearing that after knowing all this Iyya Jaan may break this relation. The only solution Nazia finds out is that Kamran apologizes to Irtiza for his behavior and he does that as Maira asks him to do.

Kamran goes to Irtiza’s office to seek his apology. Irtiza although says that he is okay but he tells Qasim that he is not getting the right vibes from Kamran he needs all information about him. Kamran also goes to Mansoor Ahmed’s house and there he once again gets a tight slap from his brother in law who is not ready to forgive him. Mansoor Ahmed clearly tells him that he can apologize to Sabeen but he will never ever give Sabeen’s hand to him. How will Kamran revenge his insult? We are happy that now poor Sabeen does not have to marry this flirt. Since now her nikkah is cancelled will Irtiza make any move to get Sabeen?

tweet
Share on FacebookShare on TwitterShare on PinterestShare on Reddit
Rameeza NasimDecember 16, 2021
the authorRameeza Nasim
Rameeza Nasim, a Paralian, passionate about poetry, drama and fiction. By giving drama critiques I feel like I am endorsing the writer's message to the audiences, I love my job. Being a critic responsibility lies on my shoulders to point out the flaws and shortcomings of the play be it on writer's , performers or director's end . I did my Masters in English Literature and Linguistics .
All posts byRameeza Nasim