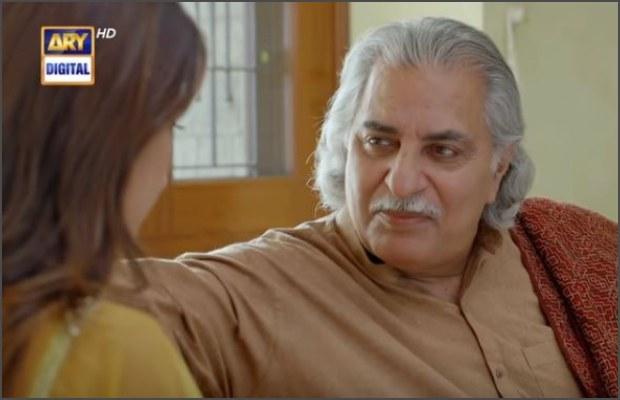 Berukhi the drama serial airing at ARY Digital is 15 episodes down. The story is going well and in this episode in particular it has taken a drastic turn but everything is quite over the top. In the previous episode, we have seen that Mansoor Ahmed refuses to accept Kamaran’s apology. In this episode, it is shown that Agha Jaan asks Sabeen’s hand for Irtiza from Mansoor Ahmed.

Kamaran is doing the drama of being extremely guilty over whatever he has said about Sabeen but Mansoor Ahmed has not moved a bit by his crocodile tears, he slaps hard on his face and he reiterates that he will never marry off Sabeen to him. He tries to emotionally pressurize Sabeen’s mother by saying that he will marry her otherwise who marry her after this on which Mansoor Ahmed gives him a shut-up call.

One of the best things about Mansoor Ahmed is that he tells his bhabi that he does not need to marry off Sabeen as a ‘Majboori’ he says he will marry her off to a good place. Agha Jaan out of nowhere visits Mansoor Ahmed’s house and requests to talk with him in private. He asks Sabeen’s hand for Irtiza and Mansoor Ahmed agrees saying that he will do as per Sabeen’s wish.

Agha Jaan calls Sabeen in front of Maira and Nazia, he asks her consent on marrying Irtiza. Sabeen remains quiet, Maira is super angry she has locked herself into the room. Iyya Jaan on the other hand is being suspicious that where has Agha Jaan gone? Sabeen tells her chacha that she cannot marry Irtiza when she knows that Maira’s engagement is about to happen with him. Sabeen’s mother refuses Irtiza’s proposal, Nazia and Maira both have sighed a breath of relief.

Maira is shown to be such a vile character that even Sabeen’s refusal she is not getting slow. She asks her Mammu to shoot Sabeen, knowing Kamaran’s criminal background he will not going to spare Sabeen after the slaps he got from Mansoor Ahmed. He will definitely take his revenge. Sabeen and Irtiza get bad news that the orphan girl Fida has died. Irtiza cancels his birthday celebrations. Iyya is mad about Irtiza’s decision of canceling his birthday festivities. She decides to visit the hospital too where she also finds Sabeen. Irtiza introduces Sabeen to Iyya Jaan. Iyya Jaan closely notices Sabeen. Will Iyya Jaan also like Sabeen?

tweet
Share on FacebookShare on TwitterShare on PinterestShare on Reddit
Rameeza NasimDecember 23, 2021
the authorRameeza Nasim
Rameeza Nasim, a Paralian, passionate about poetry, drama and fiction. By giving drama critiques I feel like I am endorsing the writer's message to the audiences, I love my job. Being a critic responsibility lies on my shoulders to point out the flaws and shortcomings of the play be it on writer's , performers or director's end . I did my Masters in English Literature and Linguistics .
All posts byRameeza Nasim