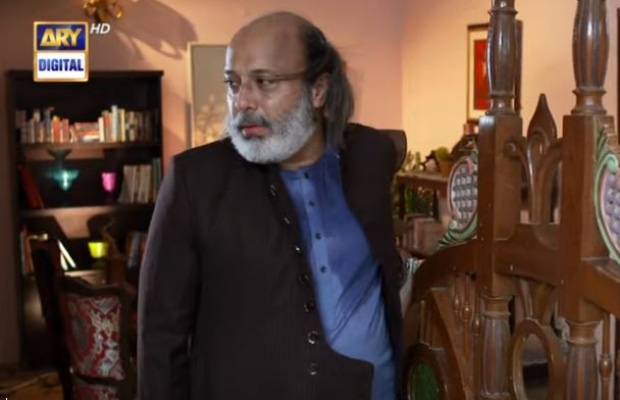 ARY Digital’s newly started drama serial is two episodes down, ARY’s dramas are usually longer than regular plays, the play airs in two parts from 8 PM till 10 PM. This episode is quite heart-wrenching but it’s all done in a very senseless way, the sequences of events are not at all well-knitted nor making any sense. In the previous episode, we have seen how Sabeen’s father was insulted by his brother’s wife. In this episode, it is shown that Baray Abba cannot stand this humiliation he takes his own life.

It is shown that how badly Sabeen’s father get insulted, instead of complaining about his wife’s misbehavior to his own brother, Barray Abba takes his own life! Why? What good it will going to bring. Does not he care for his own family? No one in the family is interested to know that what happened? It is clearly shown that he is super upset after coming from their house.

Sabeen’s mother knows that her husband is going to reject his daughter’s proposal and she herself gives him the bangles for returning then why they are searching for the bangles in the house? Isn’t it clear that he has returned it to Maria’s mother but no one is wondering what actually happens there and only Nabeel is the sane person who is talking some sense.

Then we are shown a flashback of Irtiza’s life when he is lost in his reveries. In the past, he has been married to a girl who wasn’t interested in him at all and it seems that she marries him for money and later she leaves him for another man and then we come to know that she is dead! Irtiza’s story line is not much clear. Agha Jaan’s wife is assigned to find a new bride for him.

Well, neighbors making a fuss over suicide seems quite a stretch. It is such a stupid excuse to leave the house, Nabeel is so right that they should never leave their house, he says that he is there to look after his family but his mother made such a foolish decision of leaving their house over a neighbor’s stupid argument. It is not something too serious to leave the house despite knowing that how difficult it will be for them to deal with Maira and they still have to reject Maaz’s proposal. Wondering when will they gather the courage to say no to them.

tweet
Share on FacebookShare on TwitterShare on PinterestShare on Reddit
Rameeza NasimSeptember 23, 2021
the authorRameeza Nasim
Rameeza Nasim, a Paralian, passionate about poetry, drama and fiction. By giving drama critiques I feel like I am endorsing the writer's message to the audiences, I love my job. Being a critic responsibility lies on my shoulders to point out the flaws and shortcomings of the play be it on writer's , performers or director's end . I did my Masters in English Literature and Linguistics .
All posts byRameeza Nasim