Kamran and Maira fail to create misunderstanding between Sabeen and Irtiza 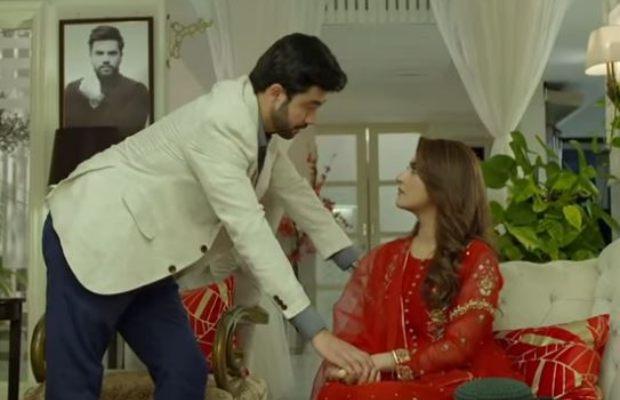 Berukhi the drama serial airing at ARY Digital is going through a happy phase with a happy union of Sabeen and Irtiza. Performances by the lead casts are good. In the previous episode, we have seen that Sabeen and Irtiza are happily married. In this episode, they continue to enjoy their marital bliss.

Sabeen is having a great time at her mother’s place, Irtiza comes to take Sabeen back when Kamran makes his entry and spoils the scene. Kamran gives a box to Sabeen saying that it is her wedding gift on which Maira intervenes and says that it is the same set he has chosen for his own wedding. Irtiza gets furious about this and takes the leave.

Well thankfully Irtiza is not furious with Sabeen, he tells Sabeen that he knows Kamran and Maira are deliberately doing this to create differences between them and he will not let them succeed. Maira and Kamaran are being happy thinking that Irtiza will scold Sabeen for whatever they have said to him but they are mistaken. Irtiza and Sabeen’s romantic scenes are a bit cheeky but they both look beautiful as a couple. We do not want to see any differences coming between them.

Thank God we have not seen that annoying house help in this episode. The actress playing Sana’s character her performance seems quite short at places. Sana’s dynamics with Qasim Agha is not make any sense why she is being so attracted to that guy? while Qasim Agha’s infatuation is making sense. Sana is happily engaged to Nabeel then why she is being so fond of Qasim, she even discussed it with Nabeel making him feel jealous. Qasim Agha has found out who is behind that truck attack and he has told Irtiza that Kamran is behind that attack. Irtiza tells Qasim not to share this news with anyone.

tweet
Share on FacebookShare on TwitterShare on PinterestShare on Reddit
Rameeza NasimFebruary 24, 2022
the authorRameeza Nasim
Rameeza Nasim, a Paralian, passionate about poetry, drama and fiction. By giving drama critiques I feel like I am endorsing the writer's message to the audiences, I love my job. Being a critic responsibility lies on my shoulders to point out the flaws and shortcomings of the play be it on writer's , performers or director's end . I did my Masters in English Literature and Linguistics .
All posts byRameeza Nasim