A helpless mother is forced to kill her own daughter 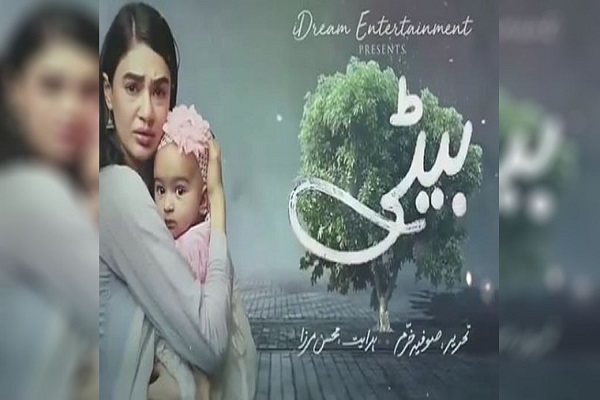 Another new drama serial addressing a very important issue of gender discrimination, Beti on aired its first duo episodes on ARY Digital on Tuesday. Although the play raises a very grave issue which still prevails in our society, however; I still think that the writer has done bit harsh treatment with this play. But with a number of similar incidents being reported every day, the play does take inspiration from this very society we live in.

Beti highlightes other societal issues like illiteracy and ignorance which are the main root cause of such epic level of gender discrimination. The script is well written by Soofia Khurram and brilliantly directed by Mohsin Mirza.

The play begins when Asma Abbasi incredibly playing the role of an orthodox ignorant Dadi who considers Beti as an ill omen. Her thoughts are similar like of Pre-Islamic Arab where daughters were considered as something to be ashamed of. She has the very same approach where she is pressurizing her poor grand daughter in law to visit some filthy Peer so that she will be blessed with a baby boy. Poor Sonia is terrified to think about her yet to be born child.

Besides Dadi, her son and grandson also share similar sort of thinking. Hashim is extremely greedy and he accepted his son Ashar’s choice, Maryam the modern educated girl, just because she owns a big house. Well it is extremely strange that Maryam and her mother despite of witnessing very weird and creepy behavior in Ashar’s family still agreed on him marrying her daughter. However, Ashar vows to make Maryam happy.

Well the actually story begins when Sonia, who is Maryam’s sister in law, despite following all instructions of Peer and Dadi gives birth to a baby girl that too a very weak and struggling child. Dadi is out of her mind when she hears the news of arrival of a baby girl. The scene where Sonia is shouting and pleading people “Kisi ko Beti Chahiye Beti laylo” ” Please Beti Laylo” is very touching and intense scene where Zainab Ahmed has done an incredible job.

Furthermore it is shown that the cruel and ruthless Dadi  she suggests her grandson not to pay for the baby girl’s treatment and having the heart to suggest him to let his daughter die. Poor Sonia helplessly is forced to kill her own baby. Yes she recites azhaan in her baby’s ears and with heavy heart she switches off the ventilator.

Maryam is extremely terrified to see such conduct as she herself is expecting too. She is more terrified that what will happen if she too will give birth to a girl. And to her surprise, Ashar does not taking her side as promised, in fact he insists that she should follow his Dadi’s instructions and that he is expecting they will be blessed with a baby boy! Maryam shares the news to her grand mother in law that she is expecting a daughter after gender verification.

Will the illiterate family be able to accept Maryam’s daughter or will Ashar be able to defend his wife and will stand for his daughter’s rights, the next episode of Beti will be interesting because the drama has begun on a high note. Asma Abbas is extremely talented and she delivers spot on as Dadi. Saheefa is convincing and so is Fahad Mirza. For now, Beti is off to an intense start and has us intrigued about its storyline.

tweet
Share on FacebookShare on TwitterShare on PinterestShare on Reddit
Rameeza NasimDecember 13, 2018
the authorRameeza Nasim
Rameeza Nasim, a Paralian, passionate about poetry, drama and fiction. By giving drama critiques I feel like I am endorsing the writer's message to the audiences, I love my job. Being a critic responsibility lies on my shoulders to point out the flaws and shortcomings of the play be it on writer's , performers or director's end . I did my Masters in English Literature and Linguistics .
All posts byRameeza Nasim