Beti Episodes 3 and 4 Review: Dadi succeeds in her evil plans

Despite of all Dadi's attempts to harm Maryam, she is successful in giving birth to a baby girl 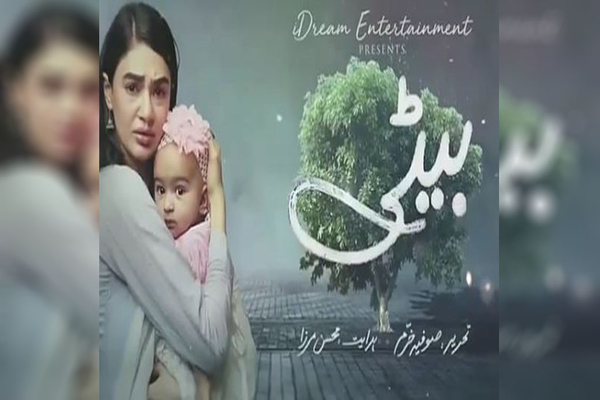 Well another dual episodes of Beti went on air last night and the play is bringing chills down our spine as I must say the writer has done an amazing job  with the story to raise such an important issue. Soofia Khuram has very bravely penned down an eye opening story which is depicting the true picture of our hypocritical society which is not less than Pre Islamic Arab where daughters were killed right after their birth. Mohsin Mirza has helmed the play really well.

In the third episode it is shown that how toxic minded Dadi is, she is playing all her tricks to get rid of Maryam’s daughter. It is also shown that how ignorant and illiterate people are blinded by these fake Peers. They make their living through fooling these stupid people. Firstly Dadi attempts to make Maryam eat Peer’s given tonic by secretly mixing it in her food but then Maryam feels something fishy and she tries to avoid eating anything that Dadi insists.

Dadi makes various attempts to harm Maryam in the most ruthless manner she tries to make her fall but then luckily she is saved. However,  Dadi’s second attempt is most brutal one and Maryam falls very badly and gets in a very critical condition.

Luckily Maryam is saved and she gives birth to a baby girl who is bit in unstable health because of pre- delivery. Maryam and Azhar are exuberant on their daughter’s arrival and she names her baby Shajia but then Maryam also fears for her daughter’s future as she has realized it very well that Dadi is against her and also that she will never accept their daughter.

On the other hand Dadi very cunningly sends Maryam’s mother to her home, asking her to bring some soup and food for her daughter. Moreover she and Azhar’s father succeeds in convincing Azhar to go home to get some rest while she plans on setting the baby up.

Dadi successfully abducts her own great grand daughter and passes her to a corrupt nurse to sell off the child. Well Maryam gets to know on time that her baby is missing she reports to the management and security. Security forces closes all doors and no staff is allowed to get out of the hospital premises, that nurse finds no way out so she dumps the baby in a trash bag in a deserted area of the hospital. Hospital management fails to find the baby so Azhar calls the police. Well Dadi in the meantime is performing her award winning acting skills in front of Azhar where she is pretending that she is very traumatized for his daughter’s missing when Maryam knows the reality and she has started freaking out!

Asma Abbas is definitely the star of the show because she brings out the best in the evil Dadi. We’re also seeing Javed Sheikh in a totally different role, which is rather impressive. Shaheefa Jabbar Khattak also impresses but we feel, Fahad Mirza can definitely do better as Azhar. So, an interesting storyline, we’re waiting to see the next episode of Beti to find out how things turn out for Maryam and her new born daughter.

tweet
Share on FacebookShare on TwitterShare on PinterestShare on Reddit
Rameeza NasimDecember 19, 2018
the authorRameeza Nasim
Rameeza Nasim, a Paralian, passionate about poetry, drama and fiction. By giving drama critiques I feel like I am endorsing the writer's message to the audiences, I love my job. Being a critic responsibility lies on my shoulders to point out the flaws and shortcomings of the play be it on writer's , performers or director's end . I did my Masters in English Literature and Linguistics .
All posts byRameeza Nasim