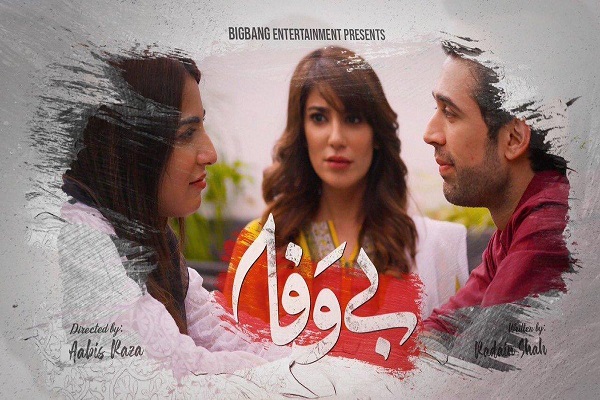 In the third episode of drama Bewafa, the intense tale of Betrayal, the story has moved forward a bit. The plot seems to be very gripping, and well written by Khudparast and Meri Guriya famed writer Radain Shah.  At the same time, the play is well executed under the direction of Aabis Raza. Ushna Shah is very artfully playing her role of a cunning office girl who honey traps her boss just because she is ambitious and Naveen Waqar is also brilliantly carrying her role of an over-possessive wife. However, Ali Rehman has outdone his role with his incredible performance.

The episode begins when Aahan is feeling extremely guilty over his conduct. He thinks that he should not have shouted on Shireen in front of the whole office. He just listens to the voice message again where she is professing her love for him and his heart starts melting for Shireen. Next day he goes to Shireen’s house with flowers and apologizes her. He is being welcomed by her mother but it seems like Shireen’s cunning sister is now getting jealous of her as now she is telling Shireen to leave him which is the exact opposite to what she told her before.

Kinza cannot help getting suspicious about Aahan as he is seen always glued to his cellphone. Aahan’s mother comes back from Ummrah and she also notices the change in him. Aahan’s mother has told him to be little more kind towards Kinza. However, he keeps texting to Shireen and has changed her name to Mustansir in his phone. Aahan’s whole office is gossiping about him and Shireen for having an affair and when an office colleague tries to talk about this matter Aahan tells him that he does not need any advice.

Shireen, on the other hand, is busy in honey trapping Aahan and to some extent, she has succeeded in it. She is impressing Aahan with her romantic dialogues and sweet talk, the thing which he now misses in her married relation and this is the reason why he feels getting more and more attracted towards her and they even talk on the phone too with each other. Kinza is still suspicious that who is this Mustansir with whom Aahan keeps chatting all the time.

To kill her suspicion Kinza calls on this number and finds a girl talking. She is really mad over it. She talks about it on the breakfast table in front of Aahan’s mother on which Aahan replies that it was Mustansir’s wife, he too has an over-possessive wife like him. Kinza is really shocked and confused, her mother in law tries to comfy her and she tells her to go to Aahan’s office as he has missed his laptop cover at home. She goes there on her mother in law’s advice but at the same time when her car arrives in the parking, Aahan is leaving with Shireen for lunch in her car!

tweet
Share on FacebookShare on TwitterShare on PinterestShare on Reddit
Rameeza NasimSeptember 25, 2019
the authorRameeza Nasim
Rameeza Nasim, a Paralian, passionate about poetry, drama and fiction. By giving drama critiques I feel like I am endorsing the writer's message to the audiences, I love my job. Being a critic responsibility lies on my shoulders to point out the flaws and shortcomings of the play be it on writer's , performers or director's end . I did my Masters in English Literature and Linguistics .
All posts byRameeza Nasim