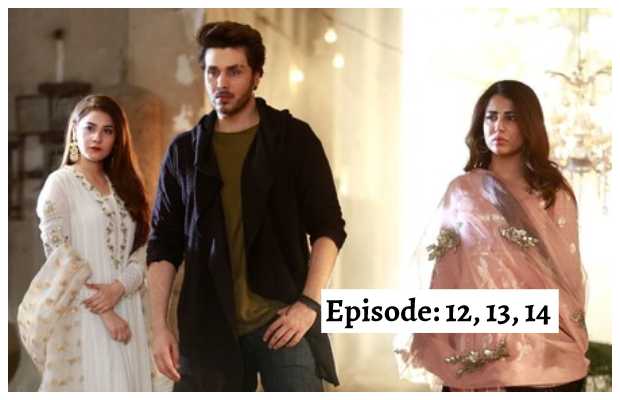 Bandhay Ek Dour Se,  the drama serial at Geo Entertainment used to be a light heart romantic comedy but now the play has taken a  serious turn and it requires a heart to watch poor Maheen suffering for nothing and cunning Roshini triumphing her win over Omar, now she is planning to go a step further. The performances were brilliant, the lead cast as well as supporting cast all have given their best in this episode.

The vile Roshini is celebrating Omar’s birthday at Maheen’s rooftop alone while poor Maheen is downstairs with her mother. It is Roshini’s wish to be the first person he spends his birthday with. For Fulfilling Roshini’s stupid wish poor Maheen has taken all the blame of stealing Omar from his family on his birthday eve and taking him to her mother’s house. Omar’s mother and dadi are really angry with Maheen.

The way Maheen calls Omar from downstairs so that her bother cannot catch him with Roshini at her rooftop is so heartbreaking. Omar is literally crushing Maheen’s feelings for that cunning and selfish Roshini. Roshini clearly knows that Omar still loves her that is why she is trying to cash Omar’s feelings for herself by emotionally blackmailing him over and over.

Yes, the conniving Roshini is so high with the triumphant feeling of winning Omar over Maheen that now she is thinking to move a step forward, she is demanding Omar to marry her! as she cannot carry this kind of relationship anymore and when Omar is showing a bit reluctance she starts emotionally blackmailing him by saying that she cannot live without him if he cannot name their love into a relationship then she must end her life as she cannot think of anyone except him. Poor Omar is so stuck in the situation that he cannot even refuse her but he himself knows that he is not doing right with Maheen.

Omar tries to discuss with Maheen his dilemma and how guilty he feels for her and Roshini. Maheen in her best possible manner tries to explain to him that for her and Omar they both are stuck in a difficult situation but as far as Roshini is concerned she is less trapped in this situation, she is free to make a decision for herself and she can easily move on if she wants in that way she will feel better and she may find a happier option. Well, Maheen is absolutely right that Roshini here is being a vamp who is after a married guy, ruining his married life all she has to do is to move on and find someone else but Roshini does not have a pure heart like Maheen, she is so cunning and selfish that she has literally zero feelings for her so-called best friend.

tweet
Share on FacebookShare on TwitterShare on PinterestShare on Reddit
Rameeza NasimSeptember 11, 2020
the authorRameeza Nasim
Rameeza Nasim, a Paralian, passionate about poetry, drama and fiction. By giving drama critiques I feel like I am endorsing the writer's message to the audiences, I love my job. Being a critic responsibility lies on my shoulders to point out the flaws and shortcomings of the play be it on writer's , performers or director's end . I did my Masters in English Literature and Linguistics .
All posts byRameeza Nasim