Zulfi is also restless, he is also finding Shehzaadi 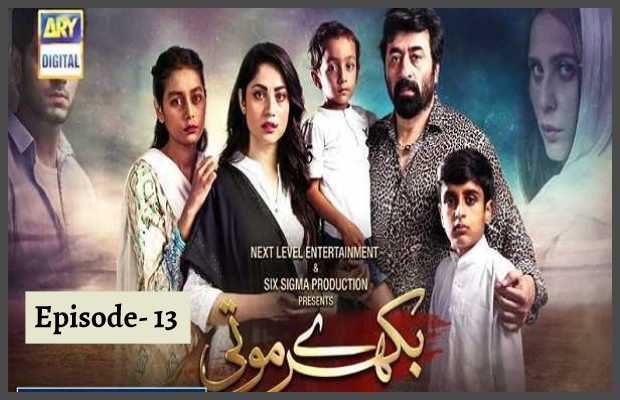 ARY Digital’s issue-based drama serial Bikhray Moti is a play that is not for faint hearts. Every episode of the play is very heart-wrenching and it requires a big heart to watch such tragedies and traumas through which these children go through and the most heartbreaking part is that in reality thousands of children face similar traumas in their life. Performances were simply brilliant in this episode particularly performances by the child stars are superb.

The most disturbing scene is when the poor Shehzaadi clad as a bride is shivering with fear and that the middle-age groom who is even older than her father is trying to get close to her. He is giving her instructions about his housekeeping as if she is not his wife but a maid. Poor girl is silently listening to all his instructions he has also said that he is a short-tempered so we are going to see domestic violence too.

Aiza along with Zulfi when returns home find that Shehzaadi nowhere and when she inquires about it from her Dadi she says that she has married her off. Zulfi and Aiza both get extremely worried. Aiza gets mad in anger and she starts snubbing Dadi, asking her that where is Shehzaadi? Dadi says that she is not going to tell her anything and she walks out of the house, Zulfi is pleading her to tell him that where is Shehzaadi but she does not utter a word and goes away.

Aiza is also trying hard to find Shehzaadi, she is desperately searching for her in her neighborhood with Janu and Taimur. During this searching, when Aiza knocks at one of the doors, Janu sees his rapists standing at the door. Janu gets terrified and runs away from the place. Poor Janu is hiding behind a door and he tells Aiza that he will not go out of the house ever again.

Well, one wonders why Janu has not shared with Aiza the reality of his rapist. He can tell Aiza that he is the person who had kidnapped him but he does not tell her anything why?. Well, one wonders if that is the same man who has abused Janu or it is Janu who is seeing the same monster in every other person? Zulfi is also feeling very ashamed of his past conduct and he also wants to find and save Shehzaadi. What will Aiza and Zulfi be able to so for Shehzaadi as she has already married off to an older man?

tweet
Share on FacebookShare on TwitterShare on PinterestShare on Reddit
Rameeza NasimSeptember 17, 2020
the authorRameeza Nasim
Rameeza Nasim, a Paralian, passionate about poetry, drama and fiction. By giving drama critiques I feel like I am endorsing the writer's message to the audiences, I love my job. Being a critic responsibility lies on my shoulders to point out the flaws and shortcomings of the play be it on writer's , performers or director's end . I did my Masters in English Literature and Linguistics .
All posts byRameeza Nasim