Churails are starting to the grasp this new world 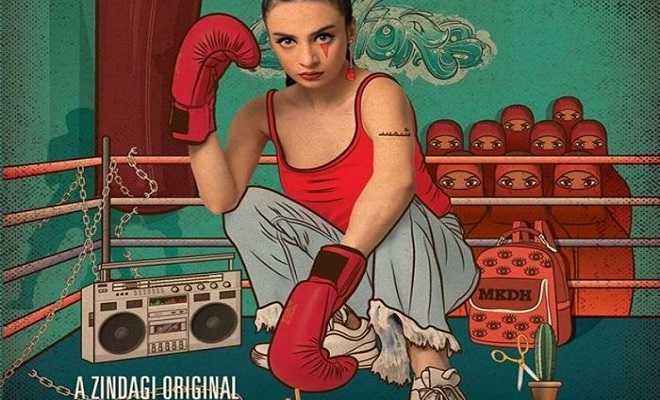 With episode 5, we are now far away from the initial premise of the show. The vigilantes are slowly becoming the victims. Victims of unwarranted hate and anger of the masses. In episode 5, Hudood, the group see the fall out the Shehnaz Khalid case. This isn’t about domestic abuse or spying on cheating and blackmailing bosses. A gruesome and graphic murder made headlines, kick-starting what they call a “media trial”. The public wants the justice Taliban style. That is what they set out do in broad daylight and in the dark. The shop is attacked and burnt with a few serious injuries. All this was avoided but the Churails had decided to fight fire with fire rather trying to wait out the storm.

Obviously the police get involved. They shut down the shop but the girls aren’t done yet. Jugnu was a reluctant participant at the start. Now she is the imitator. Eating humble pie, she goes to her competitors asking for work. They give her work alright; khatna parties. We also now know a little more about why Jugnu has a devil may care attitude towards life. Her meeting with her Ifti chacha (a misogynist Khalid Ahmed) tells us a bit about her past life. Perhaps the most interesting bit of set up for the rest of the show was to do with Batool and the inspector (Fawad Khan). Given the state of policing (well almost world over), filmmakers bank on an officer going rogue in search of the truth. In Churails, Asim Abbasi cleverly merges the personal with the professional and gives the inspector motivation to go that extra mile without it looking ridiculous. It is then no surprise that Batool opens up to him and has one of my favourite dialogue of the show with him.

Sara is now looking at the past and a particular incident with great regret. In the end, we are told that Sheela who was on the brink of stardom is missing. A lot happens in this episode as it sets up what we could call the 2nd innings of the show.

In the 6th episode Husn, we see a Churail relaunch. But not before Sara tries to put a stop to everything. She blames herself for being away at the time of the attack. The plot regarding Sheela moves forward as her roommate Jia comes to the fore desperately seeking help from Sara and the gang. That sets in motion a chain of events that gives the Churails and the police a lead in their attempts to recover Sheela.

We further look back at the past life of Jugnu. In a moving scheme, we get to know that she was married to an African American man (Dimeji Ewuoso). But he doesn’t fit in the world of Jugnu. A world where they organise parties with freshwater fountains and white rabbits jumping around. He exposes that world and Ifti as the brown sahib who believes in racial segregation. Jugnu’s is flawed and we know why.

The 7th episode titled Qurbani brings one from Zubaida. In search of her old friend, she changes her “boxer” persona to a model willing “to do anything” to climb up the ladder of success. With their investigation, the Churails find that high-end parties are organised by KK (Adnan Malik), a talent agency owner for the rich and famous of the city, who hide their identities. In the hope of bringing back Sheela, Zubaida, despite resistance from Shams (an earnest Kashif Hussain) and Batool decides to go to the party and find out more.

When he reaches the destination, it is a really surreal environment. Kudos to the art design team on creating a truly haunting experience without resorting to usual tropes. The foreshadowing that had been part of the show, becomes clearer here. A party where women are literal objects, up to modification and hire. This is a world unknown to Zubaida. She is lost here, figuratively and literally.

On the other hand, we are made aware of the “Jalwa” cream. A beauty brand being relaunched after a hiatus of many years. Sheela was to be the face of their new campaign. The Churails suspect that her disappearance and her big break might be linked. Sara pissing off her husband decides to look into it.

The plot moved at a rapid pace in these three episodes. The technical mastery of the team and the acting masterclass continued. Churails are starting to get a grasp of their new reality. An unknown world is being looked at…they need to find a way to break in and break it.